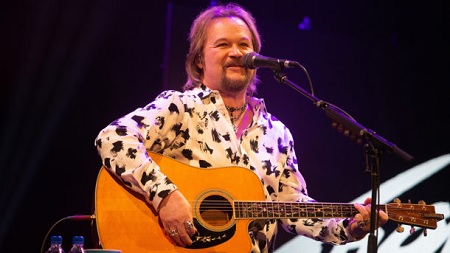 Country music superstar Travis Tritt told Fox News on Monday that he would no longer tour venues with vaccine mandates or elaborate testing regimen requirements, after several fans contacted him to say they had been turned away without realistic recourse by showing up at the box office unvaccinated or untested.

The "Here's a Quarter" singer said it's often not the states or municipalities that cause problems for his fans, but the venues themselves - and that he's not arguing for or against vaccines, but simply questioning the science behind the various mandates applied by amphitheaters.

"We've done about 75 shows so far this year, all over the country, and despite the fact that some people would try to call them 'super-diffusers,' the actual numbers don't reflect that at all," Tritt said of Tucker Carlson tonight.

"In fact, quite the opposite. In most of these areas, we've seen the number of COVIDs drop dramatically in the last few weeks and months, so it was a shock to me and a lot of my fans when in the first week of October, a lot of these shows were restricted, not by the state, not by the local city government, not by the local health department and municipalities, but by the promoters and the venue owners."

Tritt told host Tucker Carlson that he was upset that his fans had waited more than a year to be able to take time out from the trials and tribulations of everyday life to enjoy a concert, and that they were unceremoniously banned from attending his shows.

"These people haven't had a chance to go see concerts for over a year, and they finally have a chance to do it again, and now they're being turned away for some unexplained reason, so it's not about following the science or trying to keep people safe there. It's about something else. It's about trying to divide people," Tritt said.

"It's trying to shame people. It's basically trying to discriminate against people that they don't think are clean enough to be at a concert like this," the 58-year-old Georgia native said.

Tritt told Carlson that he grew up in a working-class family and understands the effort it takes for fans to set aside time and resources for his shows - and that idea inspired him to take a stand against the mandates.

"I felt like I had to stand up for freedom; freedom for all these people to be able to go out and do what they love to do and enjoy a concert without being harassed."