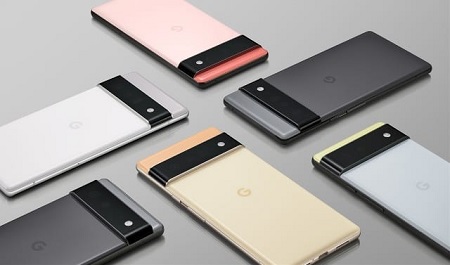 Offered company Google earlier this month , the next pixel 6 series that reveals the final design and some technical information.

Although we don't know much about the new camera, or the new Tensor chipset co-developed with Samsung. But we have a perception of the new design from every angle.

The Pixel 6 and Pixel 6 Pro seem to be one of the most substantial updates to Google's Pixel lineup since the first models were launched from HTC factories in 2016. But one detail that's clear is the abolition of the tiny Pixel phone option.

Since launching the original Pixel phones in 2016 (and arguably before, with the Nexus 5X and Nexus 6P) to last year, Google has sold two flagship phones: the regular Pixel and the Pixel XL.

There have always been some differences besides the screen size, such as the smaller batteries in regular Pixel devices. But it included pretty much identical gear.

And if you want a pixel phone, you won't lose any important features by using the smaller option.

Google was one of the smart phone manufacturers interested in selling small phones.

The definition of a small phone has changed steadily over the past few years. Edge-to-edge screens made it possible to provide larger screens in smaller frames. But anything with a screen less than 6 inches in diagonal is a small phone.

By that definition, the only small flagship phone released this year is the ZenFone 8 , which has a Snapdragon 888 chipset and a 5.9-inch AMOLED display.

And Google changed the style last year with the Pixel 5, which came in just one 6-inch size.

This year, the company returns to producing two flagship Pixel devices, but both are not small. The company confirmed that the regular Pixel 6 has a 6.4-inch screen, while the Pixel 6 Pro has a 6.7-inch screen.

And it seems that the option to buy a Pixel phone in a small size is disappearing with the new phones, marking the end of the tradition that Google has been involved in for years.

There is still a chance that the company will produce future Pixel A phones in smaller sizes. But these are low-cost devices with weaker internal hardware.

The number of small flagship phones has dwindled every year, due to their declining sales. Apple bet on the idea last year with the iPhone 12 mini, the company's smallest phone in years. But information indicates that the company ended production of the phone earlier than expected due to poor sales.

And the lack of demand for small smartphones seems to change if the phone is less expensive. Apple has reportedly had no problem selling the latest version of the iPhone SE, which retails for $399, with fewer features than the flagship iPhones.