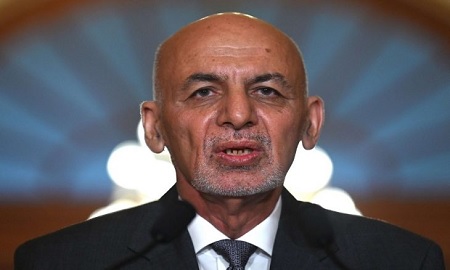 Several sources revealed that Ashraf Ghani, the former Afghan president who fled Kabul, settled with his family in the UAE capital, Abu Dhabi.

According to several reports, the information circulated by various sources about the Sultanate of Oman receiving the former Afghan president was not accurate.

Who denied these reports, and confirmed that they were inaccurate, with proof that Ghani flew his private plane to Abu Dhabi, which hosts a number of fleeing from their countries.

According to the latest report by Kabul News, Ashraf Ghani settled in Abu Dhabi after leaving Kabul with a helicopter full of money.

The channel added, "It was initially said that Ashraf Ghani had fled from Tajikistan to Oman, but a source told Kabul News that he resides in Abu Dhabi, the capital of the United Arab Emirates."

Former President Ashraf Ghani fled the capital, Kabul, on August 15, shortly before Taliban militants entered the presidential palace and announced the extension of their control over Afghanistan.

Last Sunday, the Taliban took control of the capital, Kabul, after extending its influence over almost all of Afghanistan.

And Russian media sources reported that Ashraf Ghani, the former Afghan president, fled with 4 cars and a helicopter loaded with money, while military planes carrying more than 100 Afghan soldiers landed in Tajikistan.

The Russian Information Agency quoted the Moscow embassy in Kabul as saying that Ghani had to leave some money because he could not find a place to take it.

The Russian agency quoted a spokesman for the embassy in Kabul, Nikita Ishchenko, as saying that "4 cars were loaded with money, and they tried to put another part of the money in a helicopter, but the space did not accommodate all the money." Some money was left lying on the runway.”

A number of sources circulated news of the stability of a number of personalities who have escaped from justice in their countries in the United Arab Emirates. Among them is Juan Carlos, the former King of Spain, who is accused in corruption cases, which highlighted the transformation of the Gulf country into a destination for fugitives and a haven for prosecutions around the world.

Carlos is staying in one of the most expensive hotels in the world in the Emirati capital, Abu Dhabi, at a time when the Spanish Supreme Court continues to consider receiving a bribe worth $ 100 million from the late King of Saudi Arabia, as a commission from the tender for the high-speed train project between Mecca and Medina.

Bushra al-Assad, the sister of Bashar al-Assad, is hosted in the UAE, who resided in Dubai after the assassination of her husband, Assef Shawkat, head of Syrian intelligence in mid-2012.

Dubai banks attracted a lot of Yemeni funds that were transferred after 2011, in the possession of a number of symbols of the regime of the late Yemeni President Ali Abdullah Saleh.

The UAE is considered the first financial and economic center for the Saleh family, and it shelters his son Ahmed, who used to work as an ambassador to Yemen in Abu Dhabi, and has huge investments there.

Relatives of the late Yemeni president own real estate on the Palm Island in Dubai, the value of each property ranges between $650,000 and $3.8 million, most notably Tawfiq Saleh, Saleh's nephew.