Algeria: Lamamra announces official breakup of all diplomatic relations of algeria with morocco 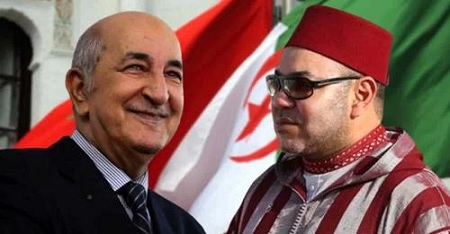 The cold war between Algeria and Morocco has reached a new level in this dangerous escalation of tension. This Tuesday, August 24, the Algerian Minister of Foreign Affairs, Ramtane Lamamra, officially announced at a press conference held in Algiers the break of all diplomatic relations between Algeria and Morocco. "We officially announce the official break of diplomatic relations with the Kingdom of Morocco from this day," said Lamamra at the end of his press conference during which he listed many grievances that the Algerian authorities officially retain against the Moroccan authorities.

And these grievances are numerous. Worse still, the head of Algerian diplomacy has made serious accusations against the Moroccan monarchy. According to Ramtane Lamamra, the Moroccan monarchy has not ceased to launch very hostile acts that undermine the national security of Algeria. "The security and media apparatuses of the Kingdom of Morocco have not stopped launching a merciless and ruthless war against Algeria. Dissemination of rumors, Fake News and malicious scenarios that undermine the stability of Algeria, Morocco has crossed all the red lines," accused Ramtane Lamamra who did not hesitate to go back to the War of the Sands in 1963 to explain what he himself describes as "unhealthy motivations" of "this historical hostility of the Kingdom of Morocco against Algeria.

Faced with this "hostility", the head of Algerian diplomacy said that clarifications have been requested from "Moroccan authorities". However, the latter "observe silence since July 16, which reflects the official support of Morocco to media campaigns aimed at destabilizing Algeria," Lamamra lamented in this regard.

The latter observed finally that the Moroccan community established in Algeria will not happen to him any evil and that the official rupture of the relations with Morocco will not prevent the administrative operation of the Moroccan consulates established on the Algerian territory.

The head of Algerian diplomacy was keen to reassure that no hostility will be shown towards the Moroccan people and Moroccan nationals living in Algeria.