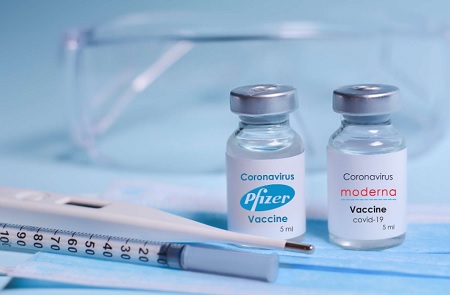 The effectiveness of the Pfizer vaccine, the most widely administered in France, drops to less than 42% against Delta variant infection, according to a new study. The Moderna vaccine seems to resist better with an efficiency of 76%.

The efficacy of the Delta variant vaccines seems to fade as studies progress. On August 4, a British study had already downgraded the effectiveness of the vaccine against infections to just 50%, all vaccines combined. A new study, pre-published on the MedRxiv website  (and therefore not yet reviewed by a scientific committee), now calculates an efficacy of barely 42% of the Pfizer-BioNTech vaccine against a Delta variant infection, against 76% for the Alpha variant . The Moderna vaccine appears to be less sensitive to mutations in the virus , since its effectiveness is reduced to “only” 76% against the Delta variant, and 86% against the Alpha variant.

60% lower risk of infection with Moderna

The study was carried out on 180,000 people vaccinated in Minnesota (United States) between January and July 2021, in a period of time when the dominant strain changed from the Alpha variant to the Delta variant, which allowed a comparison between of them. If the effectiveness of the two vaccines is disappointing against infections, it remains high against the risk of hospitalization, with a rate of 75% for the Pfizer vaccine and 81% for Moderna.

These results corroborate those observed in other states. “  In Florida - which is currently experiencing the strongest outbreak of Covid-19 to date [in the United States] - the risk of infection in July after a full vaccination with [the Moderna vaccine] was about 60% lower than 'after a full vaccination with [the Pfizer vaccine], ”the researchers write.

Same technology, but some differences

This difference may seem surprising because the two vaccines work on the same principle , namely the injection of a piece of messenger RNA comprising the sequence of the peak protein of the virus and which induces its production by the cellular machine. The authors of the study do not put forward any explanation for this difference in effectiveness and call for further investigations on the subject. We can nevertheless note some differences between the two . The Moderna vaccine thus contains 100 micrograms of mRNA, which is three times more than the Pfizer (30 micrograms per dose). In addition, the Moderna vaccine is injected pure, unlike that of Pfizer which must be diluted with 0.9% sodium chloride. Finally, the composition of the lipid particle conveying the mRNA is not the same, which can influence the good conservation of the mRNA.

Ironically, the Moderna vaccine was shunned at the start of the vaccination campaign in France, because it was assimilated to AstraZeneca suspected of causing thrombosis . Today, the Pfizer-BioNTech vaccine is by far the most used in France, with 63.3 million doses injected on August 11 against 7.8 million for Moderna and 7.7 million for AstraZeneca according to the site. Vaccine Tracker . The Moderna vaccine is also the most expensive of all, with 21.50 euros against 19.50 euros for the Pfizer or 1.78 euros per dose for AstraZeneca (which has not increased its prices). 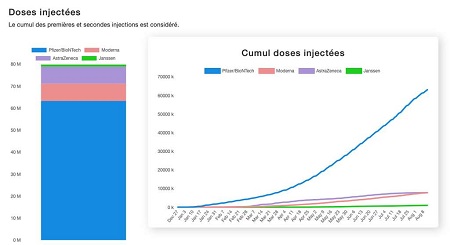 Conducted under real conditions, this study is nevertheless likely to be affected by some biases, such as the fact that the comparison with the unvaccinated is based on an untested population, therefore likely to have been infected and to have immunity. , which mathematically undermines the effectiveness of the vaccination. But it confirms the very high contagiousness of the Delta variant, which undermines the strategy of eradicating the virus by vaccination. This remains however essential, because it makes it possible to avoid an influx into hospital services , and especially many deaths, which is still the main objective.