Matrix 4: the first official images before the trailer 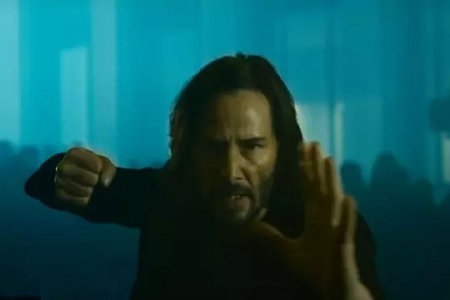 MATRIX RESURRECTIONS. With the approach of the release of Matrix 4, still scheduled for December at this point, Warner is about to lift the veil on the official trailer for Lana Wachowski's film. Discover the first images.

It had been so long since we had heard of Matrix 4 that we were starting to wonder if the film was going to be postponed. Obviously Warner intends to unveil the official trailer for Lana Wachowski's feature film this Thursday, September 9. To increase the pressure, the studio has already lifted the veil on a few seconds of official images. It was on the official What is the Matrix website that two video teasers were unveiled, one when you click on the blue pill and the other when you click on the red pill. Of course, the videos including the two teasers were quick to appear on Youtube.

On the official Warner Bros. Youtube channel, you can also discover the schedule at which the Matrix 4 trailer will be unveiled, now called Matrix: Resurrections. This trailer will be broadcast on Youtube at 2:58 p.m. The video will then probably be made available to everyone from 3 p.m. In any case, this is an event that is already setting Internet users in turmoil, the film being particularly eagerly awaited!

Almost twenty years after the release of Matrix Revolutions, the license is equipped with a fourth film entitled Matrix Resurrections. Written and directed by Lana Wachowski, the feature film will see the return to the cast of Keanu Reeves and Carrie-Anne Moss. They will resume their roles as Neo and Trinity in this fourth installment scheduled for a release date on December 22, 2021 in the United States . So the wait is coming to an end soon!

What is the Matrix 4 release date?

Currently, Matrix 4 is announced for release on December 22, 2021 in the United States. The film is due out in France on December 15, 2021. The coronavirus crisis having reshuffled the cards many times in Hollywood, it is however not excluded that the film will be postponed without warning.

What is the Matrix 4 storyline?

No information has been released on the Matrix 4 script. The return of Keanu Reeves and Carrie-Anne Moss as Neo and Trinity may leave it to be a sequel to Matrix Revolutions, rather than 'a prequel or a spin-off. As a reminder, the first Matrix movie follows the story of Thomas Anderson, says Neo. After discovering that the dystopian future in which he lives is in fact a computer simulation created by machines, he joins a group of humans freed from the virtual world to fight against the machines and programs of the "Matrix". The success of the first film had led to a whole multimedia universe around Matrix: two cinema suites (Matrix Reloaded, 2003; Matrix Revolutions, 2003), a series of animated short films (The Animatrix, 2003),

What is the cast of Matrix 4?

We know a little more about the people who work on Matrix 4. Lana Wachowski, after having co-created and directed the first trilogy, is expected to participate in the production, direction, and writing of this new film. Casting side, we already know that Keanu Reeves will resume his role of Neo and Carrie-Anne Moss that of Trinity. No information, however, on the participation of Laurence Fishburne and her character Morpheus, who completed the trio of protagonists of the first film. It was also announced that actor Yahya Abdul-Mateen II (Aquaman, Us) has joined the cast in one of the lead roles along with Jada Pinkett Smith and Jonathan Groff.

Is a Matrix 5 movie in the works?

people keep asking, so let me clarify there are two different #Matrix projects at wb. i wrote one set earlier in the timeline of the matrix universe. Lana Wachowski is directing a sequel that i did not work on, but cant wait to see. Neither of them are reboots. #notareboot

As a fourth film in the sci-fi franchise nears theaters, headed up by Lana Wachowski, a fifth Matrix-related project is reportedly in development. On his Twitter account, screenwriter Zak Penn confirmed in early October 2019 that two separate projects around the Matrix universe are in preparation at Warner Bros.: Matrix 4, and another feature film located “earlier in the timeline” Matrix. It would not be "not a reboot" according to the screenwriter. If this feature film is indeed produced, it would therefore be the fifth film of the license but it would not therefore be Matrix 5 which, for the time being, has not been announced.