Man, 18, is arrested outside Victorian Parliament with a crossbow

Man, 18, is arrested outside Victorian Parliament with a crossbow

Police have arrested an 18-year-old man who jumped on the roof of a car armed with what appeared to be crossbow outside the Victoria parliament this afternoon.

Video posted to social media showed a group of police police converging on the car to apprehend the man at about 12pm.

It’s believed the man was taken to hospital for a medical assessment but was not otherwise injured. 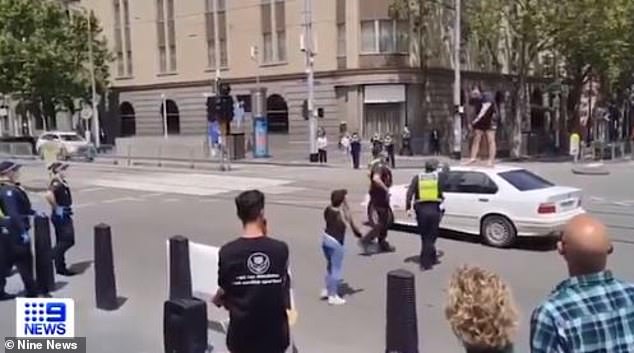 The man is seen on top of a white sedan in front of the Victorian parliament, wielding a bow as police approach him 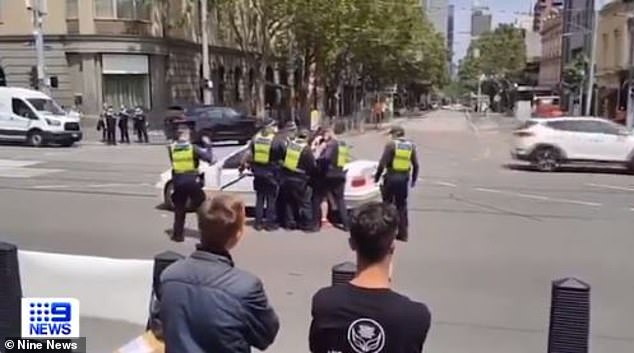 People protesting Victoria’s latest pandemic legislation can be heard yelling at police from the steps of parliament to leave the man alone.

‘You pushed him to the brink!’ one woman can be heard yelling as the man is disarmed and pushed against the car to be handcuffed.

‘What going to happen when the bill passes, there will be more of this,’ a man yells at police.

Protestors then give the ponytailed man a round of applause as he is led away.

‘We stand with you, buddy,’ one man is heard to say.

It’s not known whether the man has any connection to the protestors, who object to a new government bill that outlines when and how a pandemic declaration can be made in Victoria.

The controversial bill has been criticised as introducing excessive government powers without proper overnight by groups including Liberty Victoria, the Victorian Bar and the Centre for Public Integrity.