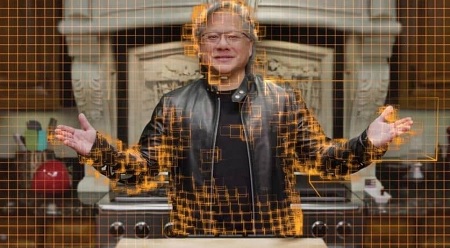 The pandemic has begun and companies are announcing or even launching their products via virtual conferences broadcast over the Internet. Companies in this situation have also found a valuable opportunity to demonstrate their capabilities in the video industry, and Nvidia is no exception.

Apple has more video conferences than other companies. This is due to its smooth transitions between scenes, as well as the quality of photography and production. However, Nvidia addressed the matter differently, during the GTC conference last April.

The American giant revealed that part of its GTC show was designed entirely via CGI technologies. These are the technologies that are used in films, specifically science fiction films.

Nvidia's use of CGI technology

CGI technology is used to produce entire scenes using powerful computers. The word CGI is an acronym for Computer-Generated Imagery.

During the previous Nvidia conference, there was a scene of CEO Jensen Huang, and during this scene Huang talked about one of the company's technologies, and then he and his surroundings disappeared.

Through a documentary released by the company, we discovered that this 14-second scene was entirely CGI-based. This includes not only the effect of the disappearance, but other elements such as the CEO himself and his facial movements.

The team of engineers and designers at NVIDIA demonstrated how to create this video. It relied on hundreds of photos of the CEO himself, and his environment, his kitchen.

3D models are designed using more than 16,000 different elements. In addition to adopting a huge number of professional DSLR cameras to take different photos of the CEO of the company. Literally a full charger of DSLR cameras were used to be able to take enough pictures.

The team then relied on a number of artificial intelligence techniques to complete the work. Nvidia's efforts have already succeeded in deceiving viewers.

This is because some expected CGI techniques or graphic effects to be used in the scene of Huang's disappearance and the disappearance of the environment around him, but no one expected to fake his appearance in the clip. There is no doubt that this Nvidia achievement shows us how advanced technologies such as artificial intelligence and deep fakes are.