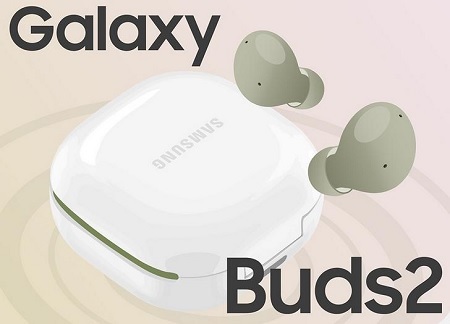 Announced that the company Samsung during the Unpacked event on what you see as the future of phones, a folding removable devices, as revealed by telephone Galaxy Z Fold 3 and Galaxy Z Flip 3, two screens presented the potential of folding in different ways.

In addition to mobile devices, Samsung also unveiled the Galaxy Buds 2. The new version carries ANC Active Noise Canceling, while it comes at a price of only $149.

This is one of the few times we see this technology in this price category. At the moment, the Buds Live and Buds Pro versions are also available from Samsung, priced at $170 and $200, respectively. And the new version mediates these two headphones in terms of performance.

The new headset outperforms the Live version by providing an active noise cancellation feature, as it is the smallest in size and lightest in terms of weight, in addition to the small and compact design of the headset, and it comes with glossy and not matte colors.

The headset is characterized by its ability to connect quickly and automatically with Samsung phones. It will also allow you to connect to any phone or other device through the traditional Bluetooth connection.

Due to the small size of the headset, it fits perfectly in the ear, as well as the design of the headphones themselves and their conformity to the shape of the ear.

What may be wrong with the speaker is that it does not support stopping the music automatically when it is removed from the ear, in addition to that it supports water resistance with an IPX2 standard only, which is a weak standard compared to the IPX7 standard offered by some competitors, which Samsung itself offers in the higher category.

As for battery life, the Galaxy Buds 2 will provide five hours of continuous music playback with active noise cancellation. Its case will be able to charge it for an additional twenty hours.

In the case of use without the noise isolation mode, the headset will last up to seven and a half hours of continuous operation, and the number doubles to 29 hours charging through the case.

The speaker also supports the surround sound feature. Besides supporting two-way adaptive audio. This is while the headphones can work for a full hour when charged for only 5 minutes. Besides, the headphones support wireless charging.