Surface Book 4 may not come with a detachable screen 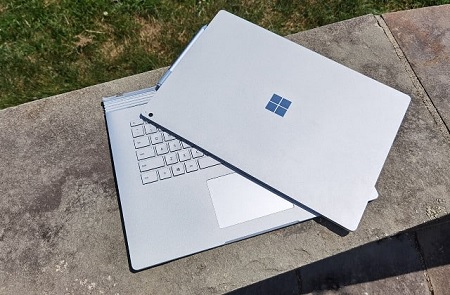 Operating company Microsoft to develop a laptop computer pioneer new which Surface Book 4 may appear as soon as this fall.

Many expect this new laptop to replace the Surface Book, which has been Microsoft's flagship laptop line since its debut in 2015.

And details about the Surface Book 4 are still scarce. But a recent patent may give us a first look at what the company is looking for.

Sources indicate that this new laptop has a non-detachable screen. The patent file supports this information, displaying a screen that can instead be swiped forward like the Surface Studio.

The patent shows a laptop using a hinge similar to what is found in the HP Elite Folio and HP Specter Folio.

And the non-detachable design might allow the company to put in more powerful chips, too. The current Surface Book design allows for a maximum of U-series processors, up to only 4 cores.

Most laptops have options for six or even eight-core processors like Dell's XPS 15- and 17-inch laptops.

The new computer may also have NVIDIA RTX graphics, a larger trackpad, and a screen size of about 14 inches with a dynamically adjusted high refresh rate and a 3:2 aspect ratio.

The Surface Book 4 is also one of the first devices to ship with Windows 11, which includes quite a few new features that can take advantage of the new hardware, such as:

Surface Book 4 may not come with a detachable screen

Microsoft hasn't announced any new hardware yet, so there's no official release or availability date. However, Microsoft always holds a hardware event in the fall, usually in October. The same thing is supposed to happen this year.

Assuming the device is announced in October. Surface Book 4 may not start shipping until late October in some markets. And in the following months in other markets.

Due to a global shortage of chips, it is not known what markets the Surface Book 4 will be available in outside of the US.

Microsoft is expected to announce a few more devices in October as well. Including Surface Duo 2 and Surface Pro 8.