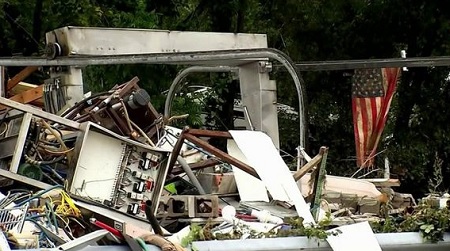 In Tennessee, in the United States, it is not fire that rages, but historic rains. At least 21 people have lost their lives. Others are missing, including several children.

In Tennessee, nothing resisted the power of the waters. Not even a house, moved several meters by the force of the current. In the state, the damage is considerable. The water is gradually receding, but leaves behind a devastated city. At least 22 people died. "The water rose very quickly, some residents even thought it was a tidal wave," said a local woman. A hundred kilometers away, the scene of chaos is similar.

In the supermarkets, foodstuffs are thrown away. In nearby stores, owners are trying to salvage what's left of their goods. Residents are digging under the rubble, salvaging what is left of their belongings. Those who have lost their homes are being housed in gymnasiums for the time being. President Joe Biden said he was ready to help Tennessee.