Who are the most prominent Taliban leaders who led the movement to control Afghanistan? 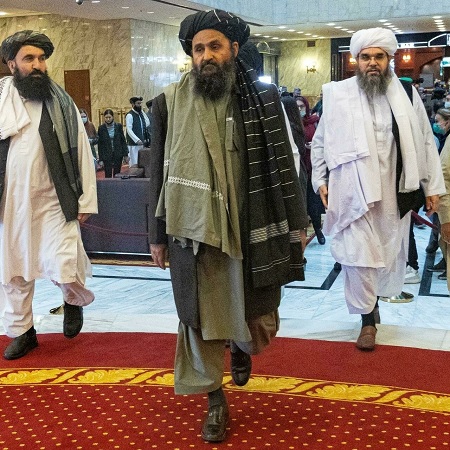 Taliban co-founder and deputy leader Mullah Abdul Ghani Baradar (centre) with other members of a Taliban delegation as they arrive for an international conference on Afghanistan in Moscow on March 18, 2021.

Taliban co-founder and deputy leader Mullah Abdul Ghani Baradar (centre) with other members of a Taliban delegation as they arrive for an international conference on Afghanistan in Moscow on March 18, 2021. © AFP

After the Taliban took control of Afghanistan, following the fall of the cities, successively, within days, and then entering the presidential palace and many government sites in the capital, Kabul, on Sunday, questions increased about the people who lead this movement, whose names remained a subject of ambiguity for many observers. Who are these people and what role did they play within the movement?

Ambiguity surrounds the leaders of the Taliban movement, which took over the reins of power in Afghanistan after taking control of the capital, Kabul, just as it happened when it ruled the country between 1996 and 2001.

The following is a brief account of the main leaders of this radical Islamic group:

Mullah Haibatullah Akhundzada took over the leadership of the Taliban in May 2016 during a swift transition of power days after the death of his predecessor, Akhtar Muhammad Mansour, who was killed in a US drone strike in Pakistan. Prior to his appointment, little was known about Akhundzadeh, who had hitherto been more interested in judicial and religious matters than in the art of war.

This religious scholar has great influence within the insurgency in which he led the judiciary, but analysts believe that his role at the head of the Taliban will be more symbolic than practical. Akhundzada is the son of a religious scholar, originally from Kandahar, the heart of the Pashtun region in southern Afghanistan and the cradle of the Taliban. He was immediately pledged allegiance to Ayman al-Zawahiri, the leader of al-Qaeda.

Al-Masri called him "the Commander of the Faithful", which allowed him to establish his credibility among the jihadists. Akhundzada took on the delicate task of uniting the Taliban, which was wracked by a violent power struggle after the death of Mullah Mansour, revealing that it had hidden for years the death of its founder, Mullah Muhammad Omar.

He managed to achieve the unity of the group, and he tended to be conservative, content with broadcasting rare annual messages on Islamic holidays.

Abdul Ghani Baradar grew up in the province of Uruzgan in Kandahar. He is one of the founders of the Taliban movement with Mullah Omar, who died in 2013, but his death was not revealed until two years later. Like many Afghans, his life was changed by the Soviet invasion in 1979 and he became a mujahid and is believed to have fought alongside Mullah Omar.

Following the US intervention and the fall of the Taliban regime in 2001, he was said to have been part of a small group of insurgents willing to come to an agreement recognizing the Kabul administration. But this initiative failed.

Mullah Baradar was the Taliban's military commander when he was arrested in 2010 in the Pakistani city of Karachi. He was released in 2018 under pressure from Washington in particular. Barader is respected by the various Taliban factions, and then he was appointed head of their political office in the Qatari capital, Doha.

From there, he led negotiations with the Americans that led to the withdrawal of foreign forces from Afghanistan and then peace talks with the Afghan government that came to nothing.

Sirajuddin Haqqani is the son of one of the most famous leaders of the anti-Soviet jihad, Jalal al-Din Haqqani. He is the second-in-command of the Taliban and the leader of the powerful network that bears his family's name.

He has also been accused of assassinating some senior Afghan officials and holding Westerners hostage before releasing them for ransom or for prisoners such as US soldier Bo Bergdahl, who was released in 2014 in exchange for five Afghan detainees from Guantanamo Bay.

Known for their independence, fighting skills and lucrative trade, Haqqani fighters are apparently responsible for Taliban operations in the mountainous regions of eastern Afghanistan, and are believed to have a strong influence on the movement's decisions.

Mullah Yaqoub is the son of Mullah Muhammad Omar and the head of the military committee that wields great influence in the Taliban and decides the strategic directions for the war against the Afghan government. His association with his father, who was revered by the movement's fighters as the leader of their movement, is a unifying factor for such a broad and diverse movement.

However, its role within the movement remains the subject of speculation. Some analysts believe that his appointment as chair of this committee in 2020 was merely a symbolic measure.