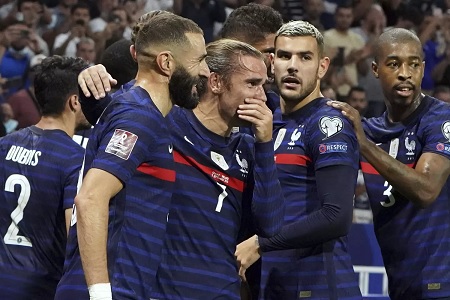 FRANCE - FINLAND. The French football team was reassured last night in Lyon by dominating Finland 2-0, thanks to two goals from Antoine Griezmann. A result which allows the Blues to strengthen their first place in the group D standings of the 2022 World Cup qualifiers. Discover the summary of the meeting, the goals in video and all the reactions.

FRANCE - FINLAND: THE SUMMARY OF THE MATCH

Before leaving Lyon, Didier Deschamps will surely have uttered a big sigh of relief last night. The result and the way against Ukraine and Bosnia must have given headaches to the French coach, who had found himself in recent days at the heart of critics but who as always has been able to recover. There are still questions, for sure and they will not disappear completely, but the victory won last night against Finland (2-0) offers a nice breath of fresh air for the Blues. A little on their momentum of the last 180 minutes, the Blues first floundered against the opportunistic Finns at the start of the meeting. Fortunately for the 55,000 people who came to Groupama Stadium, the menu was then more digestible than at previous meetings. Radiant, Antoine Griezmann took advantage of a radiant agreement with Karim Benzema to score first with a sumptuous outside left foot before the break (1-0, 25th minute). After a very lively start to the second half, Griezmann did it again with a shot from a very narrow angle, this time to double the stake and equal Platini in the standings of the scorers who wore the tricolor jersey (2-0.53rd minute), with Benzema on the penultimate pass and Léo Dubois as a decisive passer. The Finns were the victims of this very strong and inspired duo. The score could have been a little heavier but, despite the more than nourished encouragement of a public conquered to find his child prodigy, Benzema was unable to offer them the long-awaited gift. No matter, the packed stands of Groupama vibrated because the Blues were able to restore smiles and cheerfulness to their supporters. And thanks to this victory against Finland, France strengthens its position as leader of its group and sees theWorld Cup in Qatar is fast approaching. It will now be necessary to follow up to avoid making this match a simple burst of pride. The goals in video :

If you missed the victory of the Blues against Finland, here are the two goals of the evening, signed @AntoGriezmann ???? #FRAFIN https://t.co/GZfQjg4Zlq

FRANCE - FINLAND: THE DEBRIEF OF THE MATCH

The sports daily underlines this morning the great performances of Antoine Griezmann and Karim Benzema during this France - Finland. The first, author of the two goals of the match, obtains the score of 8/10 while the second, decisive passer, is credited with a 7/10. Martial, Hernandez, Rabiot, Dubois, Zouma, Lloris (6/10), Pogba, Kimpembe and Varane (5/10) follow. On the Finnish side, Nissilä and Kamara (5/10) get the average.

Invited to analyze this France - Finland, today, in the columns of L'Equipe, the former OL coach notably underlines the fine performance of the offensive players: "The Grizou match, everyone saw it . It puts things in order. He makes us a match of world champion. His relationship with Benzema was essential, although I also liked Pogba's long play on Karim. Karim's one-touch play , it's a treat. You would have to put a fixed camera on him to realize his game with his back to goal and a touch. It's exceptional, frankly. Him in front and Griezmann in ten found each other well, yes ( ...) Kylian was not there and he is one of the best players in the world. It can only be more. For me, he is essential ".

Asked last night about the performance of Griezmann and Benzema in the absence of Kylian Mbappé, the coach of the France team also said: "I would have preferred to have Kylian if I could. His presence would not have been possible. not prevented this positioning. Then, it is complementarity. There, it is a duet or even a trio with Anthony (Martial). Kylian has his place in this trio. Then, it is rehearsals, adjustments between them and with the animation on the sides or the midfielder. Kylian was not there but there is no picture, I prefer him to be with us ".

10:54 - A formula also convincing on the offensive plan

The advantage of this 3-5-2, when it is well animated, with players evolving at their position, is that it also allows to install an attacking trio with a more axial profile, without neglecting the sides and keeping defensive security. Result, Antoine Griezmann, positioned as a playmaker, and Karim Benzema, in the role of center-forward, shone, and Didier Deschamps may have finally found the right formula to associate these two players with Kylian in the future. Mbappé (injured, the PSG player was replaced yesterday by Anthony Martial). However, it will remain to find high-performance lane players in this very specific position. Here is what, for example, the eleven-type of the Blues could look like in this configuration and when all the injured are available again:

Rarely successful when he decides to align a pattern in 3-5-2, especially during the elimination in the quarter-finals of the last Euro against Switzerland, Didier Deschamps was rewarded for his daring against Finland, probably because, this time, he was not mistaken about the profile of the players, by aligning for example Léo Dubois and Théo Hernandez on the sides, players more suited for this role of piston than Pavard and Rabiot who had been established in this position against the Swiss last summer.

The man of the match, Antoine Griezmann, stopped at the microphone of TF1 last night to comment on this victory against Finland: "I am very happy with my performance and that of the team. We wanted to show that we were solid and that we hadn't lost anything. We did this evening. We may have found a system (Editor's note: 3-5-2) that suits us better, it is the coach who will decide. We were strong, we won nicely ".

"To be masters of our destiny, it required a victory against Finland, recalled the coach of the France team last night. Today, our evening opponent has two games less. Potentially, it may be return to 11 points after the October meetings. Will it be back to a point when we have to go there in November? In November, we will have to finish the job because we still need points ". The Blues have two more games to play in this group D, cut Kazakhstan on November 13, and Finland on November 16.

10:09 - The classification of group D, France gives itself some air

Here is the classification of Group D (Europe zone) of these qualifiers for the 2022 World Cup after the matches last night. All the teams do not have the same number of games played, but the victory against Finland does the greatest good for Didier Deschamps' men.

The reaction of Markku Kanerva, the Finland coach, after the defeat against the Blues: "We are disappointed, we knew it was going to be a bit complicated and the France team deserves to win. It was better and we have to learn from our mistakes in order to improve. There were some fantastic combinations on the French side, between Benzema, Pogba or even Griezmann, we had the impression that they were always one step ahead and we can see the difference with the World-class players. Our players are not yet at that level. We tried to reduce the distances but we could not do better. Today, it is difficult to imagine aiming for first place in the group. second and the dams, it is perhaps more plausible ".

The coach of the France team did not hide his satisfaction last night after this convincing victory against Finland: "I am not relieved, I am happy, happy for the players and what we have done, for the result which was essential and because we put it in the manner also in front of a public which was marvelous, he reacted The victory was essential in the race to the qualification. We obtained it by showing of very, very good things. Tonight, it was more in line with what we are capable of doing. Even if there are players who are just starting out, collectively the performance was of a good level ".