Gilboa Prison Breakthrough: The Freedom Tunnel and a Good Example 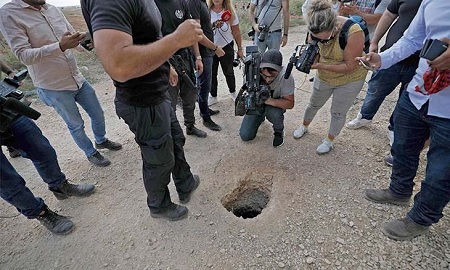 Six Palestinian prisoners succeeded in infiltrating Gilboa Prison, which is considered one of the most fortified and guarded prisons of the Israeli occupation. The demise of a long time or short.

It may be fair to conclude a first indication behind this heroic act that the entity, which produces and exports the most complex eavesdropping, intelligence and espionage devices to the various regimes, east and west, failed to notice a few meters of a tunnel dug patiently, persistently and intelligently to restore to the prisoners the right to life and freedom from the provisions Unfair double life. This fact is not brought out of bragging about what the six prisoners did, as much as it is a simple acknowledgment that this occupation, and every occupation in fact, is more weak than shackles the will to stay and disrupts the force of truth.

A second indication is that the six prisoners, in the context of their dedication to regaining freedom, planning and implementing the goal and digging the tunnel, regardless of their organizational affiliations, reflected a tendency to Palestinian unity that gives a lesson to Palestinian politicians and officials outside prisons, who repeatedly failed to negotiate the minimum rules for a unified Palestinian national action. It may have been a coincidence, or a malicious intent on the part of the Israeli Prison Service, that a former leader of the “Al-Aqsa Brigades” and the “Fatah” movement wanted to meet in the same cell with members of the “Islamic Jihad” movement, but the result resulted in the people of the same country coming together to set a good example in front of History is in plain sight of their own people and the world at large.

A third indication is that the dazzling narratives that take the title “The Great Escape” and narrate the success of prisoners or prisoners in penetrating the siege of detention camps and prisons, became famous in modern history within the Nazi heritage in particular. In this way, it reminds the world, or those who benefit from the memory at least, that there are about 4,850 Palestinian prisoners in the prisons of the occupation, including 41 women and girls and 225 children, as well as reminding of 540 prisoners under a category unique to the Israeli fascism and calling it “administrative detainee”, meaning a prisoner without charge or trial.

Perhaps the last indication concerns this entity, which its supporters, friends and protectors here and there in the world like to call it “the only democratic oasis” in the Middle East, but with a judicial system that can sentence a Palestinian prisoner to life imprisonment twice + 15 or + 35 years, on charges of belonging to a terrorist organization. Movements that resist settlement, house demolition, land bullying, uprooting olive trees, racial discrimination, and imposing a siege on dozens of villages, towns and cities.

It is not surprising that panic spread in the various political, police, military, and security institutions of the occupation following the breach of Gilboa prison, not only because of the scandal of penetration into one of the most notorious Israeli prisons, but also because the incident also includes exposing more lies of the entity about itself and the deceptions of its friends about it, and because it repeats Defining “the oasis” by its only worthy racist, settler and occupier names.