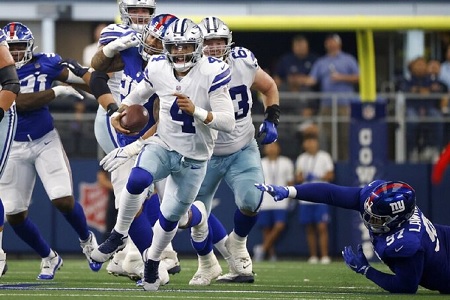 From attack, from defense, Dallas continues its good start to the season

In a match where Dallas will never have trembled, the Cowboys notably made the difference in the second half with several touchdowns and a new interception from Trevon Diggs in defense.

New York believed in a few minutes but the many injuries including that of Daniel Jones (5/13, 98 yards) for concussion were right in the hopes of the team.

New York resists despite everything

The start of the match is marked by the clumsiness of the two teams between Dak Prescott (22/32, 302 yards, 3TD, 1INT) who loses the ball twice in his first three series with an interception and a missed snap causing him to lose the ball while he was within 10 yards of New York! Meanwhile, Dallas still managed to score a field goal (3-0).

New York side is not much better with 1 missed field goal and 2 punts in attack. The fate persists even on the Giants since Saquon Barkley is injured in the ankle on one of these drives and must leave the field and his partners for the end of the meeting.

The premises end up finding the fault early in the second quarter when Prescott sends a deep pass to Ceedee Lamb (4rec, 84 yards, 1TD). It's 49 yards and the touchdown for Dallas (10-0).

Dak throws a DIME to CeeDee for the TD 🎯

We also have to wait this quarter to see Daniel Jones make his first pass! Like his quarterback, the New York attack is getting better and goes on 10 points with a field goal then a touchdown from Devontae Booker on a 4 & goal! A drive that will have seen the rookie Kadarius Tooney (10rec, 189 yards) finally shine this season.

New York comes down to 10-10 but the bad news is Daniel Jones' injury on this series as he tried to score a touchdown on a race… The quarterback suffered a concussion and had to leave his partners for the rest of the season. match.

The 10-0 conceded by Dallas has the merit of waking up the Cowboys. In a series while no huddle and rhythm, the Cobwoys quarterback ends half-time by connecting to a 24-yard pass with Amari Cooper in the end zone (17-10).

If New York and Mike Glennon manage to register a field goal (17-13) on the first series after returning from the locker room, then everything gets complicated. First, because the New York attack does not really advance between turnover and missed opportunities like this 4 & goal missed in the third quarter.

But above all because Dallas continues in attack with points on each of these drives. Ezekiell Elliott (21 races, 110 yards, 2TD) scored two touchdowns in quick succession with a run and a reception to show the extent of his palette. Meanwhile, the premises had also scored a field goal (27-13) after another interception of Trevon Diggs, his fifth game in a row with an interception!

New York thinks of closing the gap at the end of the 4th quarter with a new touchdown (20-34) from Booker but Dallas is teasing with its division rival and adds a field goal and an interception returned for a touchdown by Anthony Brown. The Cowboys then passed the +20 point mark again and won 44 to 20.

The Texans win a fourth straight victory and still assert themselves a little more as the favorite in the NFC East. For New York, the evening turned into a nightmare with a disturbing Daniel Jones before his exit due to injury and the injury of several of the team's holders…