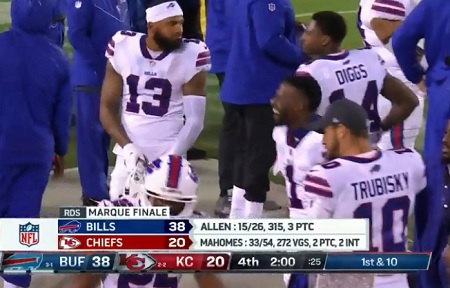 Quarterback Josh Allen set the tone for the Bills in the first quarter, scoring the game's first touchdown himself, which went 7-3.

He added more by air by joining Emmanuel Sanders in the end zone in the second quarter. Sanders contributed two touchdowns in the end.

Dawson Knox netted him his fifth major of the season, on a 53-yard play.

Patrick Mahomes suffered two interceptions, one of which Micah Hyde returned for 26 yards for a touchdown. Mahomes threw for 272 yards and two majors.

Chiefs running back Clyde Edwards-Helaire left the game in the second half with a knee injury. Travis Kelce was also out in the dying minutes of play after suffering a blow to the head during an incomplete pass.

The game was suspended before starting the second half. Thunder and lightning around Arrowhead Stadium in the Kansas City area caused the break.

The game finally resumed after a 1.15 hour delay.

The Bills were leading 24-13 at halftime. They have now had the halftime lead in each of their last 13 regular season games. It is the longest such streak in NFL history.