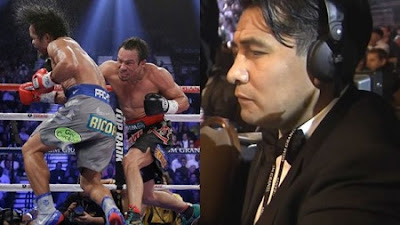 Huge confession posted by former world champion Marco Barrera in the controversial video which was at the time that Juan Manuel Marquez knocked out the Filipino Manny Pacquiao In 2012 at the time it was rumored that the former boxer bet a million dollars against his compatriot, hence his reaction of concern, but now everything is denied.

While airing your podcast One More Round , Marco Barrera , decided to clarify matters based on the controversial video, assured that he had not seen Marquez's knockout and that his reaction was to watch the monitor for replay.

"I did not see the madrazo, nor Julio César Chavez he saw it, that's why it was my reaction, I immediately turned to the monitor to see the replay," he said. he declares. Fence.

He also explained that while everyone was partying, he just turned around to see the monitor where they played the explosive knockout rehearsal.

“Whenever we had to cover a big fight with TV Azteca they would put me in a corner with Chavez, when I was standing on the monitor watching the replay Chavez gets up to not celebrate Marquez's knockout , but it does. got up because the others did and I just stood looking at the monitor, "he said," I pointed at the monitor and told them to watch the replay so they would realize what happened.

Also around this time it was mentioned that Marco Barrera was jealous of Marquez's triumph over Manny Pacquiao, but this was denied by the former champion himself, as he assures that they are neighbors and greet each other warmly every time. times they see each other.

"No desire, when a Mexican boxer wins I'm very happy, whoever he is, he talks to me or he doesn't talk to me I'm happy that they win, Marquez and I'm neighbors, so I'm not envious, even less to bet a million against him, it is more that night that I did not bet anything ”. Explain.