Mary Berry to be named Dame Commander by Prince Charles 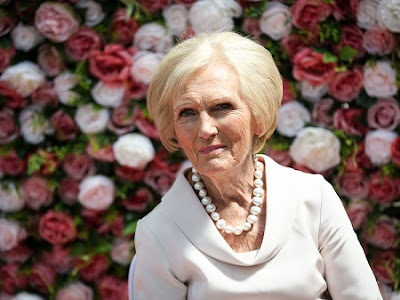 The writer and culinary entertainer has published more than 50 books in a career spanning more than five decades. She will be honored at a Windsor Castle investiture ceremony with the Prince of Wales today.

Dame Mary has become a popular figure in recent years after serving as a judge on The Great British Bake Off and presenting her own programs.

Kate and Prince William appeared alongside her on BBC's A Berry Royal Christmas in 2019.

During the festive special, the Duchess of Cambridge revealed that "Mary" was one of Prince Louis' first words as he was exposed to her cookbooks.

Kate said, "One of Louis' first words was 'Mary' because at his height are all my cookbooks on the kitchen shelf.

"And kids are really fascinated by faces, and your faces are all over your cookbooks and he would say 'That's Mary Berry' ... so he would definitely recognize you if he saw you today."

During the unique program, William and Kate made a number of royal visits with the former Great British Bake Off star.

The TV chef said, "They don't just arrive and shake a few hands, give a few smiles and a speech, they want to get involved and they want to see what they can do.

"And it's not just a visit, they come back and ask for the results and they remember who they talked to last time. I think that's remarkable.

The ceremonies resumed in June after being interrupted during the Covid pandemic.

There are likely a number of recipients who waited to be honored by a member of the royal family, rather than opting for a local presentation or receiving the honor in the mail.

Sir Philip May is also recognized, the husband of former Prime Minister Theresa May, who will be knighted by Charles for political service.

Sir Philip was the second husband of the United Kingdom and, far from supporting his wife, he forged his own successful career in the financial sector.

Steven Knight, the director and screenwriter who wrote the film Spencer about three days in the life of Princess Diana and created the popular drama Peaky Blinders, will be named CBE.

Karen Gibson, founder and director of the Kingdom Choir that performed at the royal wedding of Prince Harry and Meghan Markle, will be named MBE.