The NFL returns to Tottenham 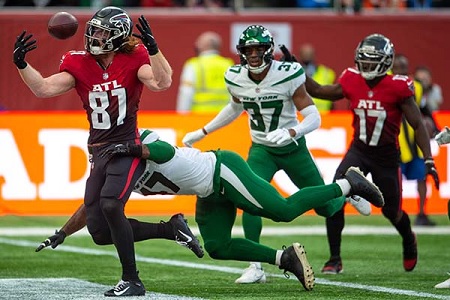 What a pleasure to find the NFL in London after a blank year. We will agree, the poster is not the most attractive. But Jets QB Rookie Zach Wilson could record a second straight win over the Falcons against Veteran Matt Ryan, who scored no less than 6 TD in the last two games. The icing on the cake is that we are on site to make the event live for you!

Ok, you have to be motivated to brave the administrative constraints of the treacherous Albion. Between Brexit and Covid, even for a Round Trip during the day, you have to show a white footing and book a PCR test to enter our British neighbors.

It takes about 40 minutes to reach "White Hart Lane" from St Pancras station. The Tottenham Stadium is a gem. Both externally and for its interior fittings. The stands, the lawn and all the facilities make it a world must-see.

What about the press area, it's better than anything I've seen in the US. In terms of cooking, on the other hand, our English friends remain true to their reputation and the "Mac & Cheese" chicken they offer me at the media lunch is as tasteless as it is indigestible! I can't wait to explore the lawn. It's 12 p.m. and the kickoff is 2:30 p.m. The teams should soon warm up.

Zach Wilson is one of the first to step onto the synthetic turf at the stadium. He will perform a long muscular awakening without a ball. The stadium is gradually filling up. It will be sold out with more than 65,000 spectators. No one wears the mask. A local starlet pauses in the VIP stand with a Union Jack balloon. Maurice Jones Drew the former star of the Jaguars is on the edge of the lawn. It has doubled in size since the end of his career.

Cordarrelle Patterson, the handyman of the Falcons decided to play the "ambianceurs". He sends balloons into the stands to the cheers of the fans who try to hit the leather!

The start of the match is one-sided with a lively Matt Ryan and a struggling Zach Wilson. To make matters worse for the Jets' non-existent racing game, she was led 20-3 at halftime.

I made a touch with a cheerleader unless it's the London sun that hits me a little too much on the head. A family came with a little baby a few months old. he is dressed in the colors of the Packers and his father shows him to the camera.

At the resumption, the D des Jets will sound the revolt by releasing some "big plays". The fans are in heaven because the end of the meeting offers a semblance of suspense. The Falcons will ultimately win 27-20 with 342 yards from Ryan. Kyle Pitts, the fourth player selected in the last draft, two rows behind Wilson, had his best game in the NFL. He caught nine passes for 119 yards and scored his first touchdown in the league.

I return to Paris with images in my eyes and a big desire to put the cover back next week with Jaguars v Dolphins .