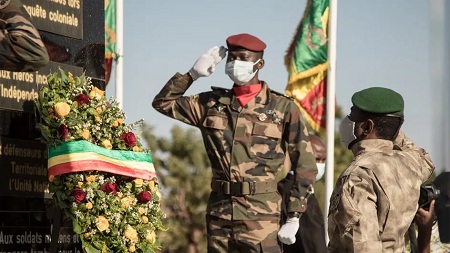 France has "taken note" of the expulsion of its ambassador to Mali, the French foreign ministry said on Monday.

The Malian junta, in power in this country , will expel the French ambassador, announced state television on Monday 31 January . "The government of the Republic of Mali informs national and international opinion that today (...) the French ambassador in Bamako, his Excellency Joël Meyer, was summoned by the Minister of Foreign Affairs and Cooperation [ and ] that he has been notified of the government's decision inviting him to leave the national territory within 72 hours ," the authorities said in a statement.

The Malian authorities have justified this decision by recent "hostile" statements by French officials against them . “It is clear that the situation as it is cannot continue , ” warned Jean-Yves Le Drian, the French Minister of Foreign Affairs, on Friday January 28. This summons marks a new hardening of tensions between Mali and France, the former colonial power engaged militarily in the fight against jihadist fighters in Mali and the Sahel since 2013. Relations have continued to deteriorate since colonels seized power by force in August 2020.

Paris  "takes note" of the expulsion of its ambassador to Mali, the French Foreign Ministry said on Monday, recalling its solidarity with its European partners and its commitment to continue the fight against terrorism. "In response, France has decided to recall its ambassador ," said the Quai d'Orsay.