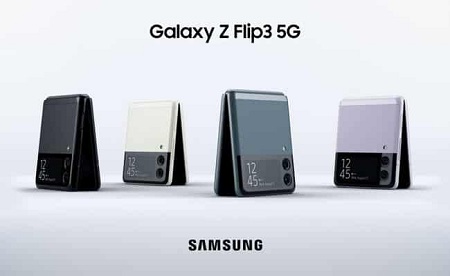 Announced that the company Samsung during the Unpacked event on what you see as the future of phones, a folding removable devices, as revealed by telephone Galaxy Z Fold 3 and Galaxy Z Flip 3, two screens presented the potential of folding in different ways.

Got a Galaxy Z Flip 3 on the external screen larger and more useful and practical small screen cover over the original device.

The Galaxy Z Flip 3 starts at $999, dropping Samsung's foldable devices below $1,000 for the first time.

This gives you 128GB of storage and 8GB of RAM.

Like the more expensive Galaxy Z Fold 3, the Galaxy Z Flip 3 is powered by the Snapdragon 888 with 5G network and is IPX8 water-resistant.

Samsung has provided a dual rear camera with a wide and ultra-wide lens. And both a 12 - megapixel sensors accurately, with the lens provides the standard aperture f / 1.8 and install the optical image and the ability to + video recording HDR10.

The digital zoom comes with a capacity of 10x. So you don't get the extended space zoom capabilities of the S21 series.

The main 6.7-inch 22:9 screen has been upgraded from a 60Hz refresh rate to a smoother 120Hz adaptive refresh rate that automatically adjusts to improve battery life.

There is still a selfie camera at the top of the screen. And that's after Samsung switched to a camera under the screen in the Fold 3.

The company has made improvements to the durability of the protective layer covering the ultra-thin glass. And in the case of the Galaxy Z Flip 3, the company says it's 30 percent more powerful.

And the smoother primary screen is certainly a welcome improvement. But the phone's most significant upgrade is the outer cover screen. It's now four times larger than the tiny oval that was of little use over the original Z Flip.

The company notes that it can be used for video recording and vlogging. You can also access Android Quick Settings or use Samsung Pay from the cover screen.

It seems that Samsung has made enough improvements so that you can pull the folded phone out of your pocket and respond to a notification or text message without having to open it.

Other upgrades to the phone include new stereo speakers that support Dolby Atmos audio. The company says the phone's Flex Mode - which is activated when the phone is partially folded - places media such as videos or album art in the top half and automatically repositions the controls to the bottom.

The Galaxy Z Flip 3 is available in seven colors: cream, green, purple, black, grey, white and pink. Pre-orders begin today, and the phone will be available in stores on August 27.