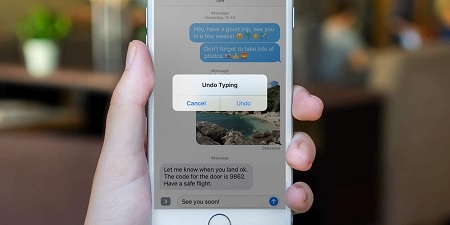 iPhones allow you to undo what you typed through the keyboard without having to touch it.

This is done through a feature called undo by vibration, where you shake the phone to undo what you wrote at the end of the sentence.

This feature is one of the shortcuts that many neglect, as it is considered unknown to some because you need to activate it.

Some apps use this feature differently and are their own, where you can shake the phone to report a problem with the Facebook app.

But when you enable Undo by Vibration, any functionality of it within the app is completely gone.

This feature works with all functions in the iPhone, not just writing, where you can undo a photo transfer or send an email, for example.

Activate the Undo feature by vibrating on the iPhone

You can activate this feature on your phone by following these steps:

First, head to your phone's Settings menu, then the Enhanced Access menu, and then the Touch menu.

You can find the option to undo by vibration is present in this menu, where you can activate or close it.

And if you want to undo what you just did without having to shake or move the phone, you can swipe three fingers from right to left on the screen.

Apple added this feature in iPhone phones after the iOS 13 update, which was released several years ago.

Apple always adds shortcuts and anonymous features in iPhone phones, and does not advertise these new features much.

Most of these unknown shortcuts work through the Enhanced Access menu, through which you can activate the tap feature on the back of the phone to perform a function.

The iPhone's Enhanced Access menu includes many features such as responding to and controlling voice commands, as well as illuminating the screen when the phone is raised.

Through it, you can activate the assistive touch feature, as a box appears on the phone screen that gives you some shortcuts to the various functions of the phone.