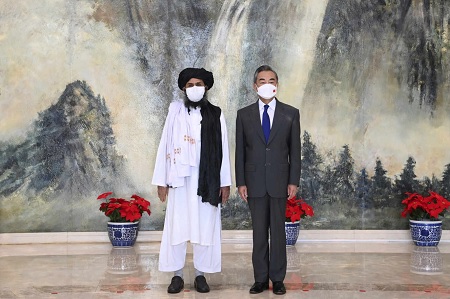 Beijing believes it has a card to play in the country: that of reconstruction and a certain economic integration with Pakistan, its strategic partner in the region.

The precipitous withdrawal of the United States from Kabul and the capture of the Afghan capital by the Taliban on Sunday, August 15, are a source of propaganda for China: in Beijing's eyes, there is nothing like this to demonstrate, as the Minister of Foreign Affairs, Wang Yi, declared on Monday during a telephone conversation with his American counterpart, Antony Blinken, that "the mechanical application of a foreign model to a country with a different history, culture and situation can only lead to failure.

In an editorial on Tuesday, the China Daily glossed over the "disastrous legacy of the United States in Afghanistan". "Death, bloodshed and a huge humanitarian tragedy are what the United States has really left behind in Afghanistan, shockingly illustrated by the Afghans who fell to their deaths after clinging to a U.S. military plane," it said. In the inventory drawn up by the Chinese media on the American fiasco, everything is mentioned: the American hubris, the "strategic waste" and the incoherence of successive presidents.

Above all, the Afghan case would be a "lesson for Taiwan". The island's ruling Democratic Progressive Party (DPP), a staunch defender of Taiwanese sovereignty, would do well to "draw the consequences," warns an editorial in the Global Times published Monday. Like Afghanistan, Taiwan is in danger of being "abandoned in turn": "If a war breaks out in the Strait, the island's defenses will collapse in a matter of hours, and the U.S. military will not come to their aid. As a result, the DPP authorities will surrender quickly, and some of their senior officials may have to flee by plane."

For Beijing, it is not so much a matter of believing in them as of propagating these triumphalist scenarios in its information war against Taipei: trolls on social networks, but also some pro-Chinese media in Taiwan, have widely echoed them. As if to better convey the message, Beijing also organized live ammunition sea and air maneuvers off the island on Tuesday. A warning against the new "red line" that would constitute the participation of the Taiwanese president, Tsai Ing-wen, in the virtual summit for democracy that the president of the United States, Joe Biden, intends to organize in December. On the American side, the withdrawal from Afghanistan was presented in July by the occupant of the White House as a way for America to "focus on strengthening its core strengths in order to face strategic competition with China and other nations. A logic that has not escaped Beijing.