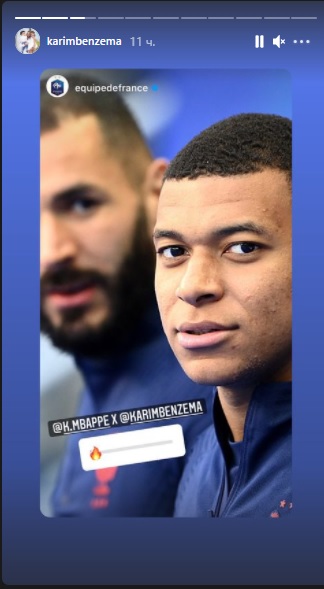 Real Madrid striker Karim Benzema re-published a photo of him with his compatriot Kilian Mbappe , sparking controversy over the possibility of the Paris Saint-Germain star moving to the Spanish capital club during the current summer transfer period.

And the French football team’s account on “Instagram” published a picture through the “Story” feature, which combines Benzema and Mbappe in the ranks of the “roosters” team, for the Real Madrid striker to republish through his account, to raise many speculations about Mbappe’s future.

Mbappe's contract with Paris Saint-Germain expires in June 2022, and many reports link the French star to moving to Real Madrid this summer or the summer of next year.

Saint-Germain is currently negotiating with Mbappe to extend his contract, and if he fails to do so, he may go to sell the player this summer to Real Madrid for about 100 million euros, or wait until the end of next season, when he will leave without any compensation.