Jimenez: Doctors told me that survival after a skull fracture was a 'miracle' 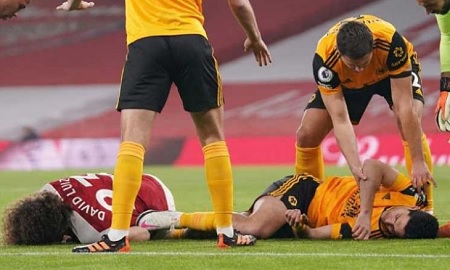 Wolverhampton Wanderers striker Raul Jimenez said doctors told him it was a "miracle" surviving after he fractured his skull during a Premier League game in November.

Jimenez played his first official match at the weekend, as Wolverhampton lost 1-0 to Leicester City, since he hit the head of Arsenal defender David Luiz and received treatment on the field before being taken to hospital.

Jimenez wears a head protector during training and matches.

"From the first moment, the surgeons and doctors told me what happened and explained the risks," Jimenez told British media on Tuesday. "Sometimes that's not what you want to hear, but that's their job. They told me it was a miracle to stay here.”

"The bone broke, and there was some minor bleeding inside my brain. That's why the surgeon had to be quick, and the doctors did a really great job.”

The 30-year-old Mexican striker confirmed that he had always felt confident that he could return to the field.

"I've always thought that after I recover, I'll be able to go back to doing what I love to do," Jimenez said. I never thought of ending my career.”

Wolverhampton will play at home with Tottenham Hotspur on Sunday.