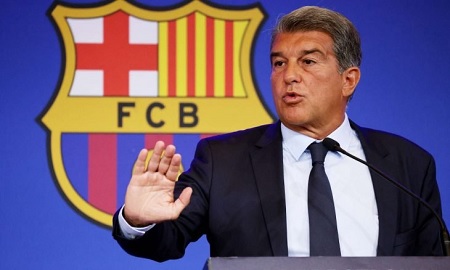 He opened fire again on his predecessor Josep Maria Bartomeu, revealing that the debts of the Catalan club had risen to one billion and 350 million euros (one billion and 590 million dollars).

The great financial difficulties of the Catalan giant were revealed last January, when it was announced that the club's total debts exceeded the one billion and 100 million euros barrier.

The financial crisis in Barcelona led to the sudden departure of Argentine striker Lionel Messi to Paris Saint-Germain in a free transfer deal, while Sergio Roberto, Jordi Alba and Sergio Busquets approached the same path.

Laporta spoke in a press conference today, Monday, about the mismanagement during the era of the previous board of directors in Barcelona, ​​​​and also touched on the size of the debts suffered by the team, in addition to other thorny issues.

"When we took over, we asked for a short-term loan of 80 million euros from Goldman Sachs because we would not be able to pay the salaries of the players and staff," Laporta said.

He added, "The previous council received 79 million euros in advance, which is 50% of the TV rights of the Spanish League, and the banks imposed an interest of 9% on it."

He pointed out, "The wage cut by the previous council was not real. We found these millions in the form of different bonuses and variables included in the new contracts."

"Eight million euros was also paid to a person to discover players in South America," he explained.