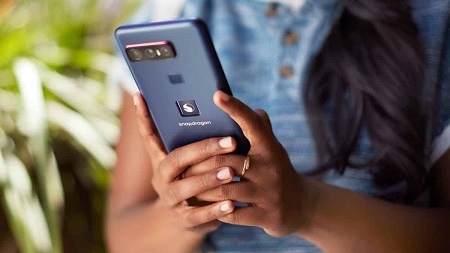 Qualcomm is exposed to the design and development of processors, with intense competition from smartphone companies, with each leading company developing its own processors.

Although Samsung relies on Qualcomm processors in some of its flagship phone models, the vast majority of them use Exynos processors that Samsung develops itself.

Google also started to rely on its own processors, as it announced the Pixel 6 phone, which uses the first chip developed by Google.

So Qualcomm is trying to flex its muscle with the Snapdragon Insiders , bringing it with its latest processor and the highest technology out there.

In order to prove its superiority in the design of leading phone processors, the company has cooperated with Asus to present the new phone.

Tastes differ when it comes to phone design, but there are some key points that make the phone different from its competitors.

This is because the phone uses a slightly outdated design, where the front camera comes hidden in a black bezel at the top.

In addition to a fingerprint sensor located on the back of the phone with a luminous Qualcomm logo underneath.

The logo is clearly visible to everyone, as it comes in the middle of the bottom of the phone with a luminous square design that you can control its brightness.

The phone also comes with circular edges and a blue color with some red areas around the camera and physical buttons.

The phone is one of the heaviest phones out there, weighing about 210 grams, which is heavier than phones of the same size.

The phone uses an AMOLED screen that is manufactured and designed by Samsung, and it works with a resolution of 2448 x 1080 with a refresh rate of 144Hz.

The 6.8-inch screen comes with a brightness of 1200 units, so you can easily see it under sunlight.

The screen works very smoothly with all the apps and games that need a fast refresh rate, this ensures that you enjoy your games to the fullest.

The sound in the new Qualcomm phone

Qualcomm is demonstrating the capabilities of its new audio chip with this phone, as it uses the latest audio technologies that the company has reached.

The new chip promises seamless and uninterrupted communication with Bluetooth audio devices, and the phone comes with four internal microphones capable of recording audio with a quality close to that of specialized audio studios.

The phone comes with a pair of wireless and wired headphones so you can test the new technologies that the company has been working on.

The speakers built into the phone are also capable of producing high-pitched and clear sound.

The phone comes with three rear lenses like all modern smartphones, offering a regular lens, an ultra-wide lens, and an optical zoom lens.

The main lens comes with a 64-megapixel sensor with a 12-megapixel ultra-wide lens, in addition to an 8-megapixel optical zoom lens.

The company promises a better imaging experience than the iPhone and Samsung's flagship phones through the phone's image processing.

This is because the company introduces a set of new algorithms that significantly improve the image quality. 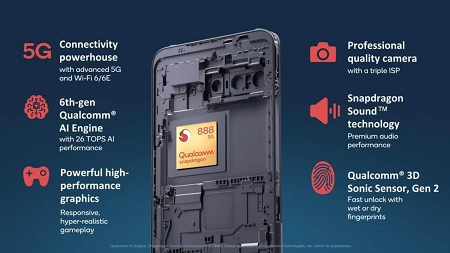 The phone uses the company's new Snapdragon 888 processor with 16GB of RAM and 512GB of storage space.

So you can expect the best performance you can get with a smartphone, and you will not face any difficulties in playing games no matter how heavy they are.

However, the phone suffers from a significant overheating problem, after playing games for several minutes or using automatic tracking mode while recording video.

The phone comes with a 4000 mAh battery, which is able to operate the phone for a day or a day and a half connected.

And that's like all flagship phones that come with the same battery size.

This phone offers the best specifications of any smartphone, as it uses the latest technology in every part except for the design.

But premium specs don't always mean a phone that stands out, as the phone offers a satisfying experience for many but it's not unique.

Especially if you take the price of the phone into account, as the phone comes at a price of approximately $ 1500, which is a price comparable to the flagship phones that offer a better and newer design.

So if you are not a fan of Qualcomm and want to support it continuously or you are looking for a great phone with powerful performance and a big battery, then this phone is not for you.