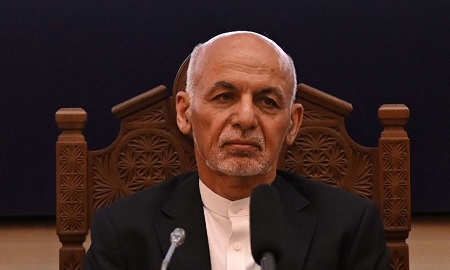 Tolo News Agency, on its Twitter page, quoted unnamed sources as saying that the embassy also requested the arrest of the former National Security Adviser, Hamdallah Moheb, and head of the office of former Afghan President Fadl Mahmoud Fazli.

The embassy accused the three of "stealing public funds" and demanded their arrest "so that the money can be returned to Afghanistan."

Ashraf Ghani fled Afghanistan last Sunday after the Taliban surrounded the Afghan capital, Kabul, before taking control of it at a later time.

Several sources revealed that Ghani settled with his family in the UAE capital, Abu Dhabi.

According to several reports, the information circulated by various sources about the Sultanate of Oman receiving the former Afghan president was not accurate.

Who denied these reports, and confirmed that they were inaccurate, with proof that Ghani flew his private plane to Abu Dhabi, which hosts a number of fleeing from their countries.

According to the latest Kabul News report, Ashraf Ghani settled in Abu Dhabi after leaving the capital with a helicopter full of cash.

The channel added, "It was initially said that Ashraf Ghani had fled from Tajikistan to Oman, but a source told Kabul News that he resides in Abu Dhabi, the capital of the United Arab Emirates."

Russian media sources reported that Ghani fled with 4 cars and a helicopter loaded with money, while military planes carrying more than 100 Afghan soldiers landed in Tajikistan.

The Russian Information Agency quoted the Moscow embassy in Kabul as saying that Ghani had to leave some money because he could not find a place to take it.