GTA 6: A MAN ARRIVED ON A TV SET TO ASK FOR NEWS OF THE GAME 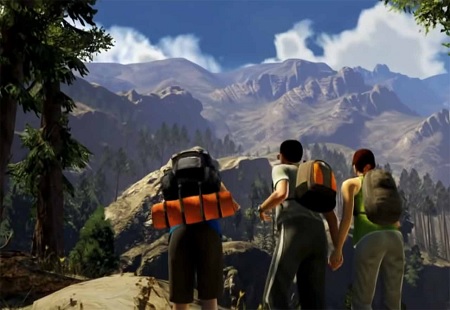 GTA 6 seems to unleash passions. On the last episode of Beat The Star, a German reality TV show in which ordinary people take on celebrities in various challenges, a man actually burst onto the scene to ask for news of Rockstar's upcoming title.

Beat The Star is the English name for Schlag den Raab , a German reality TV broadcast for several years in Teutons.

The concept is relatively simple. The show pits an anonymous candidate against any celebrity. The objective of the latter being to win several events to try to win the sum involved and thus leave with full pockets.

What is the connection with GTA 6, you will tell me? A priori, there is none, but you will quickly understand what it is.

On Reddit , a video appeared. A video captured during one of the last shows. It shows the presenter, a certain Elton, chatting calmly with Evelyn Burdecki, a reality TV star.

Nothing very transcendent so far, but that changes very quickly when a bearded man with long hair starts running on the stage. A man who explains his name is Asa, who wishes everyone a good day and who simply asks… where is GTA 6.

A GTA 6 that he explains waiting for no less than eight years.

A spontaneous interruption or a staging?

So of course, the intervention disconcerts both the presenter and the candidate, but the latter end up taking over. Asa, if that is really his name, asks them indeed to shout in front of the camera to ask Rockstar to reveal more about GTA 6. Elton answers then that he cannot do that… because he does not. has not yet finished GTA 5. And he ends by asking if Take Two paid this anonymous for his intervention.

This moment, you can imagine, caused a lot of ink to flow on the canvas. If many had fun, others wonder if the intervention of this man was not organized from scratch by the organizers of the show - we would not have talked about it otherwise - or even by Take Two.

For the moment, it's impossible to say, but the latter does not seem to want to say more about GTA 6. At this stage, neither Take Two nor Rockstar have indeed given the slightest sign of life and they seem to want to focus more on the current episode.

Rockstar has no interest in hurrying

Which, in the end, is not very surprising. GTA 5 and GTA Online continue to sell well and the end of the year will mark the arrival of their new gen version, a version that should revive public interest in the license and push owners of a PlayStation 5 or an Xbox Series X to hand over to the wallet.

As it stands, and as we explained in this file , Rockstar is not in a hurry and it can take the time to polish GTA 6 to ensure that it fulfills all of its objectives. We have indeed seen it with Cyberpunk 2077, but the slightest mistake can have serious repercussions on the release of a title. And Rockstar of course can't afford to make such a blunder. Take Two either, for that matter.

Especially if the rumors are true, then Rockstar would also be working on a remaster of three of the series' most iconic titles.