THE MOST IMPORTANT BENEFITS OF FLAXSEED FOR DIABETICS 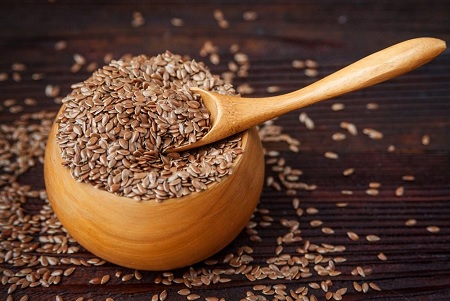 The most important benefits of flax seeds for diabetics, and for those who do not know, flaxseeds are one of the best types of healthy seeds that are recommended to be included in the daily diet due to their rich content that offers several benefits for health, foremost of which is the health of diabetics.

According to the "Medical" website, eating flaxseeds by diabetics effectively contributes to lowering blood sugar levels and delaying the development of type 2 diabetes. This is thanks to the fact that flaxseeds contain important nutrients such as soluble and insoluble fibers, which help control blood sugar levels.

What are flax seeds?

Flaxseed is one of the most important agricultural crops that have become famous in recent times, due to their high nutritional and health value. These seeds contain a good proportion of oils, carbohydrates, protein, omega-3 fatty acids and alpha-linolenic acid, an essential fatty acid that the body does not produce and that we need to get from food.

The carbohydrates in flaxseed consist of two types of fiber: water-soluble and insoluble. Soluble fiber forms a viscous mass when mixed with water, which helps control blood sugar levels. Whereas, insoluble fiber increases the volume and quantity of stool excreted by the body, thus relieving constipation significantly.

Flax seeds are also rich in high-quality proteins that can be easily digested, in addition to good amounts of useful and essential amino acids.

Can Diabetics Benefit From Flaxseed Oil?

In fact, the content of flaxseeds is very different from flaxseed oil, as the latter consists only of the fat part found in flax seeds, but its protein and carbohydrate contents are almost non-existent, which means that there is no fiber in flaxseed oil.

The most important benefits of flaxseed for diabetics

After reviewing the advantages and characteristics of flax seeds and their differences from flaxseed oil, we will review the most important benefits of flax seeds for diabetics. With an emphasis on the need to consult a specialist doctor before adopting this method and other treatment methods, as the doctor knows best about each health condition.

It is rumored that flax seeds and its oil are nutrients that have a positive effect on the health of diabetic patients, as eating them contributes to reducing blood sugar and lipids and controlling sugar levels within normal limits.

TIME and Ally Financial Name 2022 Dealer of the Year