Political commentator Van Jones dragged Democrats for living in their own ‘echo chamber’ and said that they get in their own way of winning voters by coming across in ways that are ‘annoying and offensive and seem out of touch.’

Jones, a former Obama administration official, appeared on CNN on election night as Republican Glenn Youngkin was besting Democrat Terry McAuliffe in the polls for governor of Virginia and Republican Jack Ciattarelli was ahead of Incumbent Phil Murphy in New Jersey’s gubernatorial race.

Youngkin was announced the victor this morning, while Murphy climbed past Ciattarelli and was deemed the winner this evening in an extremely tight race.

Jones said last night, ‘I think that the Democrats are coming across in ways that we don’t recognize that are annoying and offensive and seem out of touch in ways that I don’t think show up in our feeds when we’re looking at our kind of echo chamber, and I think it’s a message here.’

As he spoke, Youngkin was ahead of McAuliffe by 96,000 votes in Virginia and Ciattarelli was ahead by 33,000 against Murphy in Jersey. 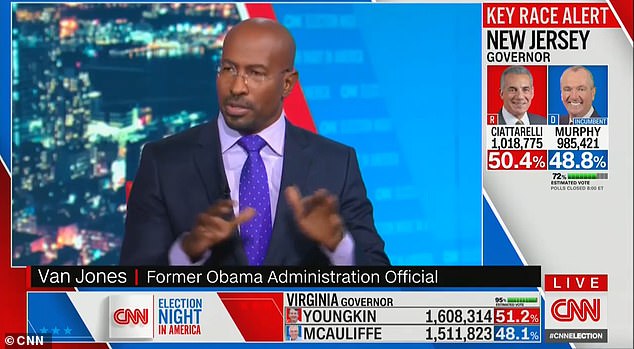 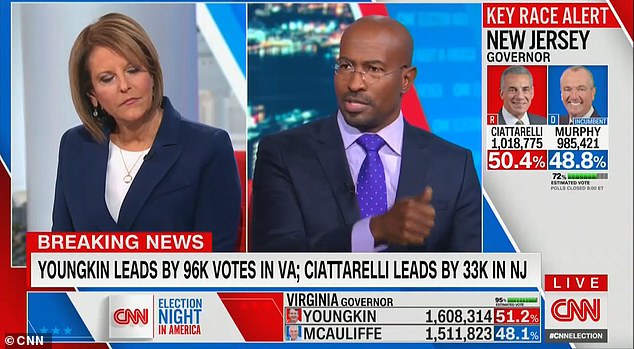 Youngkin pulled off a stunning upset to beat Democrat Terry McAuliffe, with a 2.1 lead for the Republican with 99 percent of the vote counted. Youngkin, 54, is the state’s first red Governor since 2009.

And Murphy was declared the winner on Wednesday evening after the contest was deemed too close to call nearly 24 hours after polls closed. Though some have speculated the election could come down to a recount.

Jones said that the country is not seeing an official left wing or right wing wave, but that it’s a ‘turbulent and volatile period’ and that ‘Democrats have to look in the mirror now.’

Jones pointed to the neck-and-neck New Jersey race as an example of where Democrats needlessly floundered by not appealing more to a wider range of voters. He noted that the state doesn’t have a contentious debate surrounding critical race theory or former President Trump, as was the case in Virginia.

‘There is an opportunity, I think, for the Democratic party to take this seriously,’ he said, noting that the party too often focuses on gaining the support of its ‘echo chamber’ instead of vying for a bigger coalition of suburban voters and a bigger outcome among urban voters on election night. 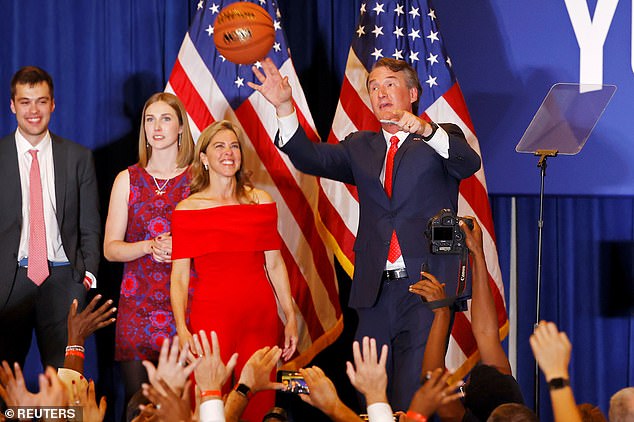 Republican Glenn Youngkin bested Democrat Terry McAuliffe as governor of Virginia, becoming the first Republican in the seat since 2009. Youngkin shot an autographed basketball into the crowd with his family at an election-night rally yesterday 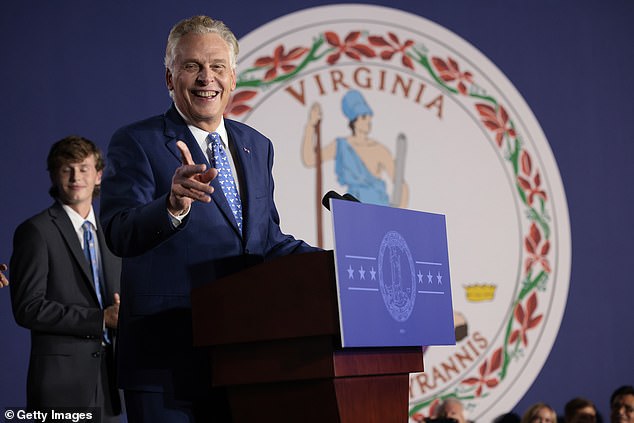 McAuliffe nationalized the race by invoking former President Trump’s name perhaps more than any other figure running for office. He is above at an election night rally in McLean, Virginia

‘What we thought was part of this Democratic coalition was really just an anti-Trump coalition with a whole bunch of volatility at the edges for black and brown voters and at the center for suburban voters,’ he said. ‘We don’t have the right issue set yet, and the right rhetoric yet and frankly the right attitude and humility to listen to get them.’

Earlier that night, Jones dragged McAuliffe and said, ‘he’s the energizer bunny of the Democratic party, but it looks like this might be the end of his career.’

He added that McAuliffe didn’t run ‘a campaign that fit his time and that fit the state,’ explaining that the Democratic candidate did not focus on local issues and too often mentioned fighting former President Donald Trump.

Jones added that McAuliffe offended voters last month during a debate over teaching critical race theory in schools, during which he said, ‘I don’t think parents should be telling schools what they should teach.’

Jones called McAuliffe’s remark a ‘big insult’ to parents who spent over a year during the coronavirus pandemic home-schooling their children. He added, ‘I think that he was trying to run against Donald Trump and this guy was able to run as a champion for parents.’ 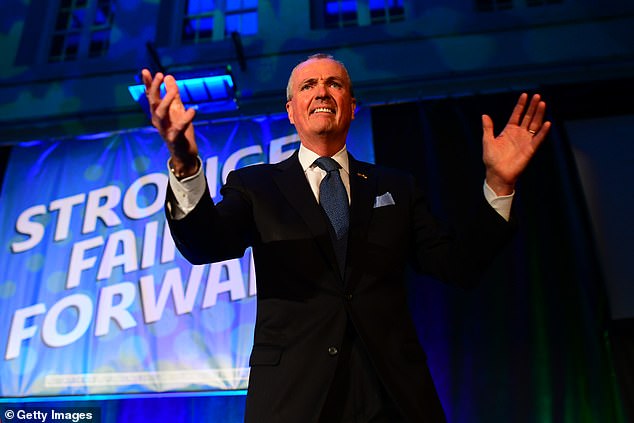 Jones spoke as Republican Jack Ciattarelli was ahead of Incumbent Phil Murphy (pictured) in the polls in New Jersey’s gubernatorial race. Murphy, above at a rally last night at Grand Arcade, ended up being declared the winner on Wednesday evening 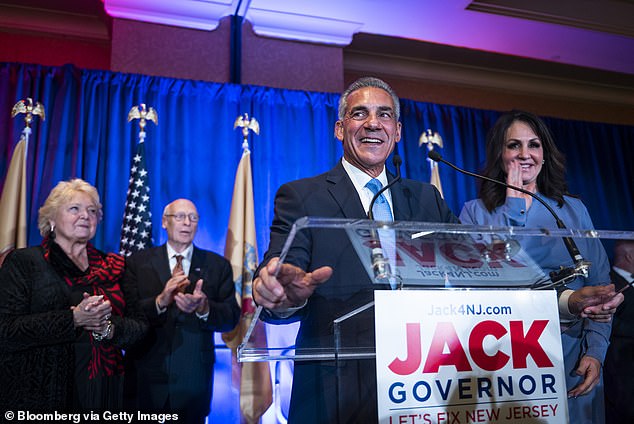 Meanwhile, a shattered Joe Biden arrived back at the White House in the early hours of Wednesday morning following his COP26 climate change trip to Europe to find a party in disarray after a thundering win for the Republicans in Virginia and dismal performances for top Democrats across the country.

The ballots are widely viewed as a referendum on Biden’s presidency, and Democrats are already in a panic and have started pointing fingers with just 12 months until the 2020 midterms.

The President looked tired and worn down as he arrived at Andrews Air Force Base, in a dark grey overcoat, before he was seen walking up the White House lawn.

It was a different atmosphere over in the Youngkin camp where raucous celebrations took place as the former investment banker was joined on stage by his wife Suzanne and their children.

‘Alrighty Virginia we won this thing,’ Youngkin shouted to the crowd.

‘Our kids can’t wait,’ Youngkin said. ‘On day one we’re going to work … We work in real people time, not government time.’

Virginia also elected its first black woman to statewide office in the state’s history, Winsome Sears, to the office of lieutenant governor as a Republican.

‘Its a historic night yes,’ Sears said of her win. ‘But I didn’t run to make history, I just wanted to leave it better than I found it.’ 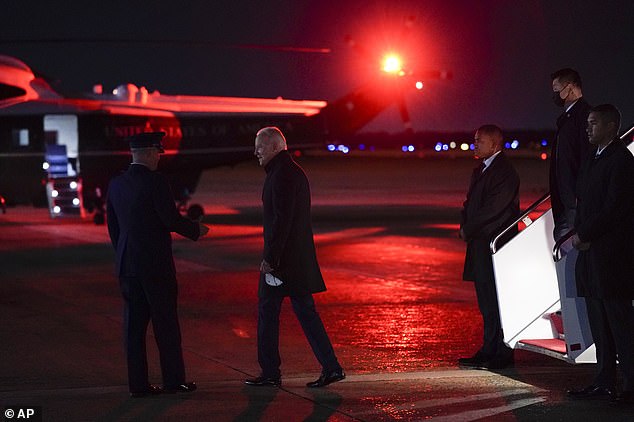 Jason Miyares, a Republican, also won his race for attorney general, in a GOP sweep in the Old Dominion, where Republicans also flipped the House of Delegates in their favor.

Republicans have not won a statewide race in Virginia in 12 years, and President Joe Biden carried the state by 10 percentage points.

Former President Trump released a statement declaring Youngkin the winner as votes rolled in: ‘It is looking like Terry McAuliffe’s campaign against a certain person named “Trump” has very much helped Glenn Youngkin. All McAuliffe did was talk Trump, Trump, Trump and he lost! What does that tell you, Fake News? I guess people running for office as Democrats won’t be doing that too much longer. I didn’t even have to go rally for Youngkin, because McAuliffe did it for me. Thank you to the MAGA voters for turning out big!’

McAuliffe nationalized the race by invoking former President Trump’s name perhaps more than any other figure running for office.

Youngkin, 54, is a political newcomer and wealthy businessman who previously served as CEO of the Carlyle Group, a private equity firm. Though he won Trump’s endorsement, Youngkin has distanced himself from the former president, who faired poorly in Virginia in 2020.

Trump held an 11th-hour tele-rally for the Virginia race, but Youngkin said he did not participate.

Youngkin’s personal wealth launched him into the spotlight, as he provided $5.5 million to his own campaign. The Republican has sought to mobilize voters by tying the race to school choice and education issues, holding Parents Matter rallies where he hit out against teachings like critical race theory.