Canada, antivax truckers block the capital Ottawa for the 3rd day in a row

The entire city center is occupied by truck drivers opposed to compulsory vaccination. While the deputies make their parliamentary return. 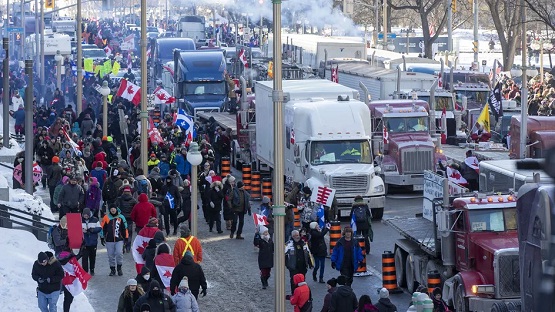 It's about these gigantic trucks, these gigantic heavyweights that we find in North America. with their customized decorations and their horns and fog horns. Thousands of heavy goods vehicle drivers took over the Canadian capital on Saturday January 29, after having sometimes traveled thousands of kilometres, and they no longer want to move.

This demonstration called "Freedom Convoy" saw trucks coming from all over Canada and also a few from the United States. The convoy was almost 70 km long according to some accounts, all in snow and cold (minus 20 degrees). Some truck drivers also blocked a highway across the country in the Province of Alberta.

Object of their anger: the vaccination obligation now imposed (since January 15) to cross the border between the two countries, in both directions, over nearly 9,000 km. According to the Canadian Transport Association, 90% of drivers are vaccinated. But the remaining 10% don't want to hear about it. And upon their arrival in the Canadian capital, they received the support of many anti-vaccination activists.

This occupation of the center of Ottawa has a folkloric and good-natured side, but it is also accompanied by multiple excesses . Some protesters display swastikas or Southern Confederate flags, a rallying sign for white supremacist movements. Donald Trump has publicly supported the movement. Far-right activists are very present on the spot, and they denounce the policy of Canadian Prime Minister Justin Trudeau, whom they have renamed "Kim Jong Trudeau", in allusion to the North Korean leader Kim Jong-un.

Ottawa police have documented multiple damage, including to the Tomb of the Unknown Soldier. Police officers were taken to task. And the bill for this occupation of the city center is estimated at the very least at 800,000 dollars per day for the community. The police also advise the 900,000 inhabitants of Ottawa to avoid the center.

A political concern for Justin Trudeau

The subject becomes politically embarrassing: Justin Trudeau had to leave his personal residence in Ottawa the day before yesterday, the services feared for his safety. And no one knows where he has lived exactly since. It should make a reappearance since this January 31 marks the end of the parliamentary winter recess and the resumption of work at the Assembly in Canada. Even if he will probably do it from a distance since he has just tested positive.

But beyond his personal situation, Justin Trudeau must above all manage the political situation. He had probably not anticipated that the movement would take on such magnitude. And the truckers intend not to move from Ottawa until the health constraints are lifted. The subject could also point the tip of his nose in Europe. Since a similar call has been made to European truck drivers to converge on Brussels on February 14th.