China enters the year of the Tiger

On February 1, 2022, China celebrated its entry into the Year of the Tiger, kicking off the Spring Festival, the most important family gathering of the year. And this time, the Covid-19 did not shake up traditions. 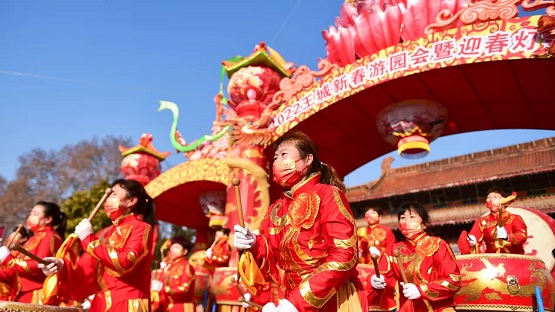 In China, for the New Year's meal , we usually think big: on the table, there is lacquered duck, chicken, pork with caramel, without forgetting the shrimps which bring good luck and the sweet sticky rice cake for dessert.

The Chinese New Year has its traditions  : just to digest, we then go around the neighborhood to present our wishes, then we take the children to the fair. In the capital where it is cold but sometimes very beautiful, today the inhabitants even try ice skating on the frozen lakes in the parks.

This year, everyone is trying to forget the pandemic  : it has been two years since most of the population was deprived of these holidays which are often the only time in the year when students, workers, migrant workers can return to the provinces to see their families.

Today, epidemic outbreaks are still breaking out all over the country. The authorities have therefore asked the Chinese to limit their trips to the strict minimum – certain cities where factories are grouped have even offered bonuses to small hands to encourage them not to move – but in fact, the journeys were able to be made almost normally.

There were even additional trains and planes (20,000 more domestic flights). The Ministry of Transport announces a dizzying number: one billion one hundred and eighty million journeys during this period of the Lunar New Year, which represents the largest human migration in the world. One billion one hundred and eighty million journeys, this figure is on the rise again: 35.6% more than last year. This is an important indicator that shows a desire to turn the page on the pandemic. Even if this goes through repeated PCR tests (they are compulsory in transport) or even quarantine imposed on arrival in certain provinces.

There is also the risk of being confined overnight. China is still applying the "zero covid" strategy: a single case detected and are neighborhoods or even entire megalopolises which are confined like the 13 million inhabitants of Xi'an, who remained under a bell from December 22 to January 24 , almost a month. Impossible to cheat, anti-covid apps track you and are directly linked to your photo and your identity number.

In Beijing, with the Olympic Games starting on February 4, it's even stricter. The capital is ultra-protected, and even if the authorities have imposed a "closed circuit" to separate the public from the athletes, the staff and the media the return of holidaymakers to the capital after the holidays is a big question mark for many. million people: if they are positive, it will be impossible for them to return, they will have to wait.

But the medium-term outlook is positive, and China is busy writing the story of the end of the pandemic.

Year of the Tiger in the Chinese Zodiac? The animal brings new hope and more particularly this year the water tiger, a feline that acts with caution and does not flinch, even in the face of difficult events. The last year of the tiger was in 2010: that year, the virtues of power and courage of the striped animal had already enabled China to become the world's second economic power.