As fears grow over a possible Russian invasion of Ukraine, the White House's "Team Tiger" is trying to come up with ways to respond to the United States' response to a range of scenarios ranging from a limited Russian parade to a full-scale invasion. 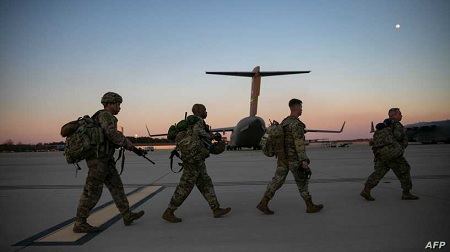 After meeting with administration officials to discuss scenarios and agree on a set of potential rapid responses that would include the first two weeks of the Russian invasion, the White House team put together plans and a procedure manual, The Washington Post says.

And it quoted senior administration officials as saying that this effort not only helped them anticipate the potential complications of the invasion but also prompted them to take early actions, such as exposing Russian information warfare before it was carried out to undermine its propaganda power.

"Diplomacy remains our hope to avoid the use of ready-made plans and manuals," said Jonathan Viner, deputy national security adviser.

And the White House said, on Monday, that the Russian invasion of Ukraine could begin at any time, and perhaps this week while reiterating at the same time that the path to diplomacy is still open to resolving the crisis.

The "tiger team," which indicates vigilance and readiness, says the Washington Post, includes a diverse group of experts.

National Security Council officials say they may not be able to predict the actions of Russian President Vladimir Putin and his military leaders. Nevertheless, the robust planning and procedures manual are worth it.

“The reality is that what the Russians might do in the end is not likely to be 100 percent identical to any of these scenarios,” Viner says.

"But the goal is to get a close enough mirror of what they are ultimately doing that the plans are useful in terms of reducing the amount of time we need to respond effectively," he added.

A possible Russian attack on Ukraine is seen as the biggest foreign policy crisis facing the US administration since its chaotic withdrawal from Afghanistan last year.