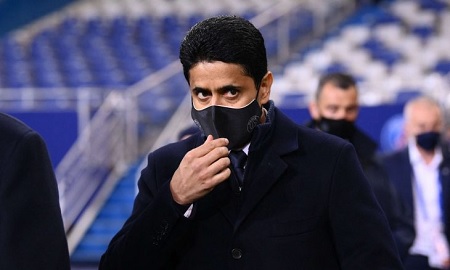 British press sources reported that Paris Saint-Germain is planning to strike beyond expectations for Real Madrid, in the same way that President Nasser Al-Khulaifi and his Auxiliary Council followed, to transfer the Dutchman Georginio Wijnaldum to the “Princes’ Garden”, after he was just around the corner. Less than moving to Barcelona in a free transfer deal.

According to the local newspaper, The Independent, the Paris club will not be satisfied with the recent escalation in terms of diplomatic and commercial relations with its Madrid counterpart, by opening the doors of “PSG” to the historical leader of Meringue Sergio Ramos, in addition to continuing pressure on Kylian Mbappe to prevent him from going to “The Independent”. Santiago Bernabeu,” but also punishes him with the kidnapping of one of the major free deals, which Florentino Perez awaits under the Bosman Act in July 2022.

And the report stated, that the Paris administration is fully prepared to lure the Frenchman, Paul Pogba, with an astronomical weekly salary, the value of which will not be in any way less than 500,000 pounds, in exchange for signing the contract to join the dream team, and consequently, retracting the idea of ​​​​going to “The Bernabeu” next summer. , based on Spanish reports, which were unanimous in the past few hours, that he tacitly agreed to wear the white shirt after the end of his role with the Red Devils.

There was widespread news about the 28-year-old’s desire to play for the club of the last century, and the matter is not only related to his white genes and his obsession with achieving the childhood dream of defending his favorite club, but rather to his conviction in the future project of Real, or what the newspaper “Marca” described as a “dream team.” The royal, along with Kylian Mbappe and Erling Braut Haaland, before the sudden shift in Paris Saint-Germain's attitude towards the world champion.

Pogba’s name was associated with the Parisian team during the period of building the dream team, amid a storm of rumors about his future, to prevent him from the club in negotiations to renew his contract in the “Theater of Dreams” until after 2022, but in the end, the Ligue 1 giant was satisfied with the resonant deals he concluded in the summer Mercato. While opening the way to revive the talk about his association with Real and, to a lesser extent, his former club, Juventus.

And if this news is true, it will give many indications about the intentions of the Parisian club towards its Madrid counterpart, or rather, Nasser Al-Khelaifi’s harsh reaction after inciting Mbappe and his family against the club, after his deterrent punishment to Barca, by kidnapping Neymar Jr in 2017 and reuniting him with his friend Lionel Messi this summer, unlike The many inconveniences on the blogger in the market.