A surprise in Ronaldo's chances to return to Real Madrid 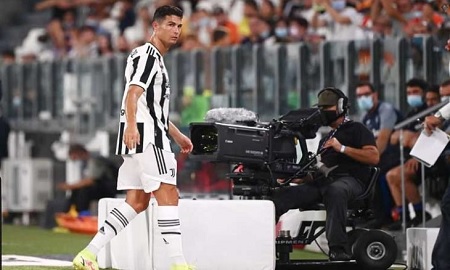 There was news in the Spanish media, about the renewed chances of legend Cristiano Ronaldo to return to his former club, Real Madrid, on the recommendation of Italian coach Carlo Ancelotti , if President Florentino Perez failed to obtain the signature of his main goal in the remaining days. On closing the summer transfer window.

And the newspaper “Marca” quoted the “El Chiringuito” program, that Mister Carlito asked the club president to return the Madeira missile to the city of “Valdebebas”, but this will depend on the results of the negotiating battle with Paris Saint-Germain for the release of Kylian Mbappe from the capital of lights this summer, in reference to It is clear that the Don will remain a potential option until the last hours of the summer Mercato.

The source explained that Ancelotti is not the only supporter of the idea of ​​returning the prodigal son, but there are other elements in the locker room that support it and hope that it will happen on the ground, despite Perez and the board of directors focusing on the file of transferring Mbappe to the “Santiago Bernabeu” this summer, instead of waiting for another year, Not ruling out anything that will happen in the last two weeks before the summer market comes down.

The report indicated that the stumbling block lies in Florentino Perez, for his objection to the idea of ​​​​returning Ronaldo again, and he also unequivocally acknowledged his appearance with the same program to promote the failed “Super League” competition, but if the attempt to sign with the future “Galacticos” did not succeed, He may reconsider the issue of the return of the historical scorer, in the presence of a real opportunity to sign him, for Juventus' desire to sell him to balance the wage bill with the heavy losses that the club has suffered in the past months.

The media circle close to Real Madrid is racing to update rumors and news about Perez's interest in Mbappe, some of which are even betting on completing the deal in the last few meters of the summer window, claiming that Paris Saint-Germain will have to agree to sell its young striker, before he has the right to leave. Free of charge in the middle of the new year.

Ronaldo left the Madrid giant in the summer of 2018, to start a new adventure with Juventus, in a deal that earned the riyal about 120 million euros, including variables, after his success in achieving all individual and collective awards over the 9 seasons he spent within the walls of the “Santiago Bernabeu”, Including, for example, the Champions League 4 times and the best player in the world 4 times, but he left the entity and is his legendary top scorer with 450 goals from his participation in 438 games in various competitions.