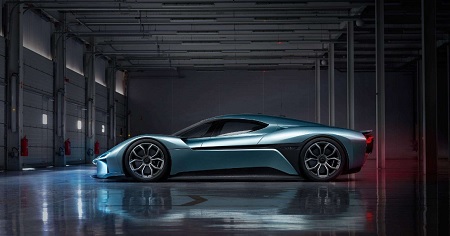 With more than 1,300 horsepower and a top speed of 313 km/h, the NIO EP9 claims to be the world's fastest electric supercar. It holds the record on a lap of the famous Nürburgring circuit in Germany and the Paul Ricard in France.

With more than 1,300 horsepower and a top speed of 313 km/h, the NIO EP9 claims the title of the world's fastest electric supercar. It holds the record on a lap of the famous Nürburgring circuit in Germany and on the Paul Ricard in France.

NextEV is not yet famous. Yet this Chinese brand won the first-ever Formula E championship in 2014 with an electric single-seater driven by Nelson Piquet Jr. Building on this success, the company has decided to start producing an exceptional electric car that can reproduce on the road performances worthy of Ferrari, Porsche and other Lamborghinis.

The power of the NIO EP9 is delivered by four motors, each with a gearbox. All of them develop the equivalent of 1,360 horsepower powered by interchangeable batteries of 777 volts whose autonomy can reach 427 kilometers. According to the manufacturer, it takes only eight minutes to replace the batteries and only 45 minutes to recharge them completely.

A feeling worthy of a fighter jet

To illustrate the performance level of its car, NextEV tested it on the famous Nürburgring racetrack in Germany, where it achieved a lap time of 7 minutes 5 seconds 12 seconds, which is a record for an electric car on this track. Last year, the Porsche Mission E, which is still a concept car, completed the same lap in just under 8 minutes. The NIO EP9 also performed well in France on the Paul Ricard circuit (see this YouTube video), with a time of 1 mn 52 s 78 hundredths that eclipsed the previous record set by an electric car (2 mn 40 s).

Behind the wheel, the EP9 promises a sensation similar to that of a fighter jet, with a deceleration of 3.3 Gs when braking and 2.5 Gs when turning at 230 km/h. Its aerodynamics allows it to create a 24,000 newtons pressure at a speed of 240 km/h.

According to information from the AutoExpress website, only six examples of the NIO EP9 have been built for a unit price of $1.2 million. They have already been sold to the investors who founded NextEV. They will use the car as a showcase for the brand, which plans to release a more conventional production model in 2017.