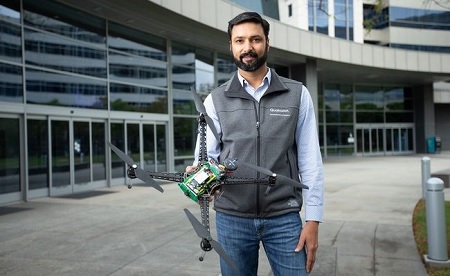 And the chip manufacturer has released a new reference design that has the latest communication and processing technology it's been talking about since last summer.

The platform aims to create a new generation of low-power drones that support 5G networks. Which can capture a lot of data through cameras and transmit that data over 5G networks to the operator. Or send it over longer distances over the network.

The exoskeleton of the drone equipped with the Qualcomm Spectra 480 image signal processor can capture 200-megapixel photos and 8K video at 30 frames per second.

In addition, the drone can record in 4K at 120 frames per second with HDR support.

As its name suggests, Qualcomm's drone platform includes support for 5G connectivity - including mmWave and sub-6 GHz - and WiFi 6.

Both use cases are explored across industries, from cargo delivery and transportation to air light shows to military warfare.

The reference drone is available for pre-order now, with a shipping date late in the third quarter. That's $400 without 5G and $500 with 5G. Those interested also have to deposit $1,000 to reserve it.

Qualcomm hopes that the customized platform can accelerate the development of drones by harnessing the power of its latest mobile chips.

The company threw its weight behind drones in 2015 and recently ventured into robotics. Last year, the company combined both areas under the Qualcomm Flight RB5 5G platform.

Its efforts are now focused on commercial and industrial drones. Giving companies a reference to base their drone designs on can help speed up their long-term project.