PETER CROUCH: Liverpool and Man City found out you cannot drop off against any team

PETER CROUCH: Liverpool and Man City found out you cannot drop off against any team

Ah, the mad days at Stoke City. Watching those two freakish results roll in at Manchester City and Liverpool had me thinking back to how much we relished upsetting the big boys.

I man-marked Yaya Toure and effectively played as a defensive midfielder. Never left him alone. You never truly know a man until you’ve trotted around following him for 90 minutes. Honestly, those matches as a forward were horrendous. 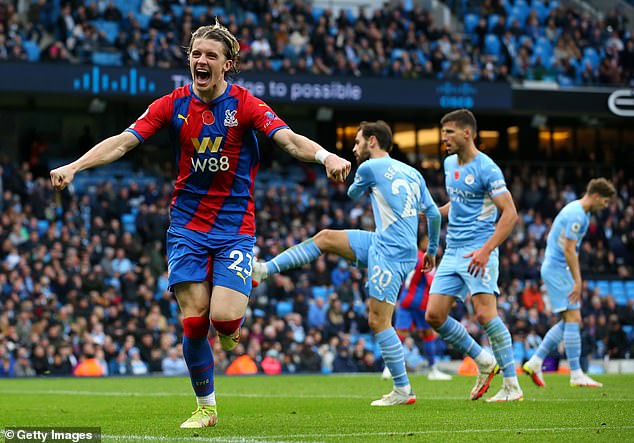 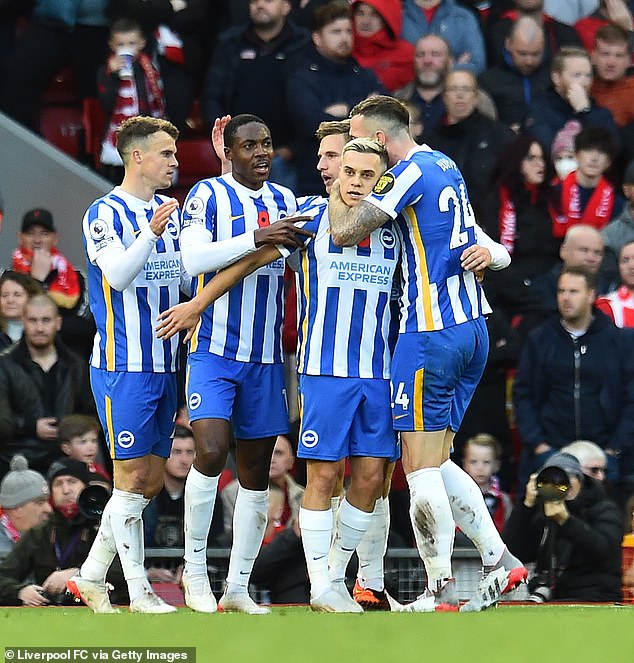 We camped in. We must have had two shots on target all game and, let’s be honest, we got battered. We kept them out time and again. Then Mame Biram Diouf sprints down the other end — doing Aleksandar Kolarov for pace and breezing past Fernandinho — to score from nowhere.

We came away from it asking: ‘How on earth did we win that?’ City were so good around that time. I’ve still no idea how we won but we constantly came off pitches asking that.

Now Crystal Palace were a bit different on Saturday and I have no interest in doing them — or Brighton, for their 2-2 draw at Liverpool — a disservice. There are serious amounts of ability in both of those dressing rooms.

I just did not see either of those scores coming, purely because of the way City and Liverpool had been playing. But I’ve watched both Brighton and Crystal Palace closely this season and have been really impressed.

I was at Selhurst Park when Palace beat Spurs and they were fantastic. Patrick Vieira has been a bit unlucky since.

The transition there has been a smooth one, they’ve bought the right players and are playing bright football. Brighton improve every year — enjoyable to watch — and with Leandro Trossard, they own a real gem. What a player he is. Such good feet. And take Palace: Wilfried Zaha can unlock any defence, Conor Gallagher is developing into a proper midfielder.

Will you allow me a cliche? Well, I’m saying it anyway: this is why the Premier League is such a brilliant division. If the top teams are right at it, they beat you by four or five. But if they slip by even the smallest of percentages, these teams happily take advantage.

You cannot drop off or play within yourself. These results are definitely rarer in other leagues around the world, and who would want to change that? At Stoke, we’d defend as a team, get one set-piece and score, and then revert back to defending! The longer the game goes on, the nervier the fans get, the more chance you have of nicking a set-piece. You’ve got to be clinical, you’ve got to defend very well as a group and the keeper has to be up to it. 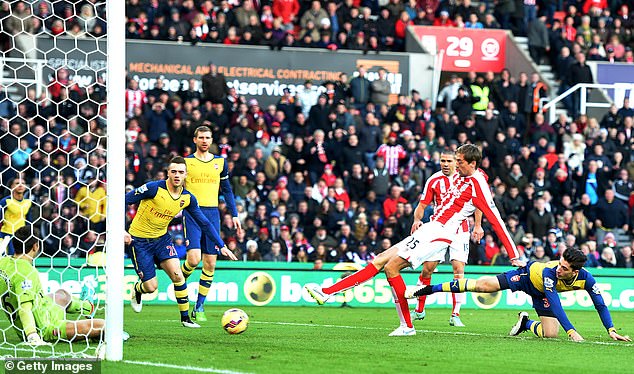 During my time at Stoke City, we often caused Arsenal a lot of trouble with our style of play 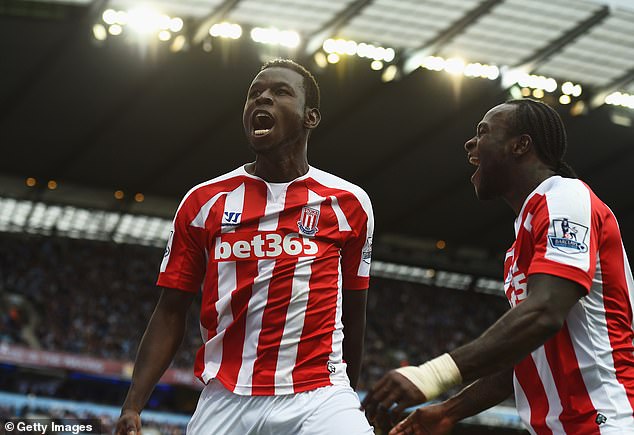 We’d obviously set up differently against the top four. Tony Pulis always said they were bonus games, our survival never rested on those matches. We’d go one up front, our wingers — Matthew Etherington and Jermaine Pennant — would sit in and it’d end up being four full backs really. They wouldn’t get out of their own half apart from taking the odd free-kick.

There is a lot of shape work in the week. Shape for fun, learning how to compact these top-class players you’re up against. There were times, certainly at City, when you’d get picked apart no matter what, but you’ve got to be ready for that slight off day. Manchester United were the same. The team talk is basically: ‘Good luck.’ You have to be prepared to work harder than a team that are better than you.

One of our biggest things at Stoke was that nobody liked the way we played. You’ve seen the clips of teams kicking balls out for corners rather than throw-ins to avoid the Rory Delap propeller. Teams would get wound up by us — I’m looking at you, Arsenal! — and we quite enjoyed that.

If you’re disliked by everybody you weirdly end up becoming revered. You’re the underdog. We were horrible to play against and good at making life difficult. It used to make us laugh, we really enjoyed it. I consider myself pretty fortunate to have been on both sides of this. 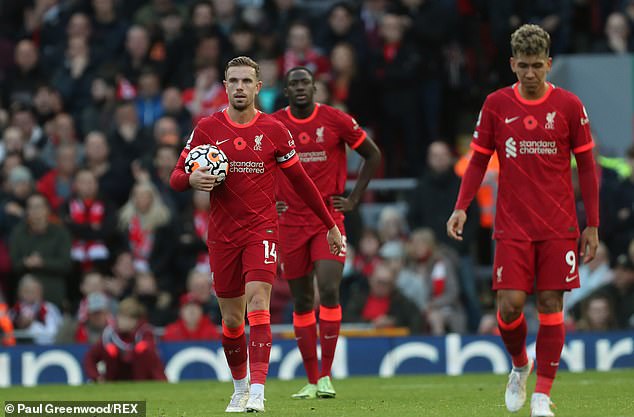 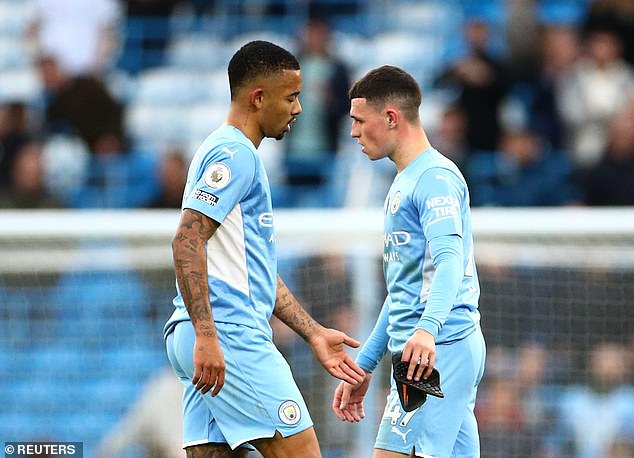 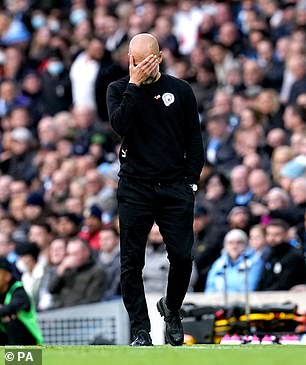 Stoke did it to my Tottenham team before I moved, 1-0 at White Hart Lane. Glenn Whelan scored in the last few minutes. Again, no idea how it happened. Glenn probably doesn’t either.

You’re in a no-win situation at a big club. There have been a few instances where we’ve lost to smaller teams in a cup. I’m thinking Barnsley beating Liverpool (that Brian Howard goal).

When you smash them it’s a case of, ‘Well yeah, we expected that’ and when you don’t there is nothing worse.

With Liverpool, I often found weekend league matches hard after those big nights in Europe. You’d play the early kick-off on a Saturday after the Wednesday had been one of the best atmospheres you’ve ever seen. The crowd can be flat and you still have to raise your game.

It can be a problem, an issue. Sometimes I could be a bit flat, there was the odd time where I felt like that.

But you look around at the very best players — Steven Gerrard, Jamie Carragher. That is the difference between a top player and somebody who plays at the top. Generally for them, it doesn’t matter who faces them.

They gave the same performance as at Real Madrid or wherever else a few days before. You have do it again because you will come unstuck otherwise. The beauty of this league is that any little slip will be pounced on. 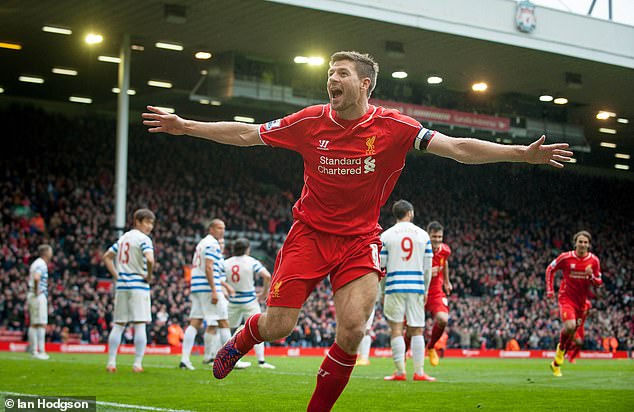 Clarets don’t get the credit they deserve

Burnley’s first home win in the Premier League since January and honestly, watching that performance against Brentford, you are scratching your head as to how that run lasted so long. There is much more quality in that team than people give them credit for. They can play.

That is what struck me during my six months at Turf Moor before retiring. The intensity and standard of training up there was something else. In little small-sided games, they are all good, technical players. Yes, they play an element of percentage football – aggressive headers of the ball – but they always link through midfield. 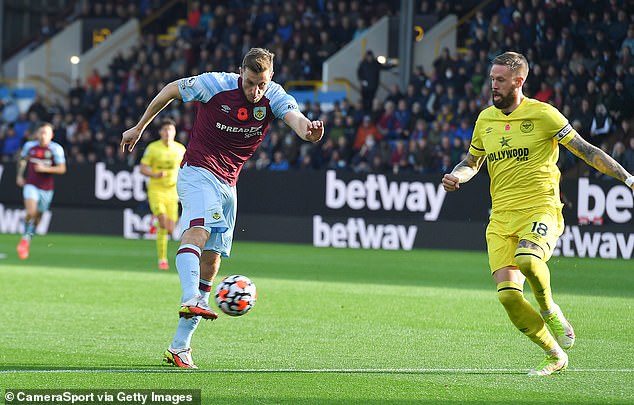 I didn’t realise how good Chris Wood’s (left) finishing is until I arrived at Burnley, and he showed that with his brilliant goal against Brentford on Saturday

Chris Wood’s incredible finish, smashing a bouncing ball, was something I witnessed regularly. I was actually surprised at how good Wood and Ashley Barnes were at finishing when I arrived. I obviously knew they were good players but didn’t realise how good.

I’ve been in top dressing rooms and there is a lot of ability in theirs. As lads, it was a brilliant place to be around and you can go a long way with an environment like that. Nobody thinks they are better than anyone else, the players get on and want to work for each other.

They are a demanding bunch. If somebody is not pulling their weight, they are not afraid to tell them, which is probably a dying art. I really expect them to be fine this season.