They are Russians, Ukrainians and other nationalities. The Saint Petersburg Festival ballet, performing in Clermont-Ferrand (Puy-de-Dôme), Friday March 4, does not forget the Ukrainian drama. 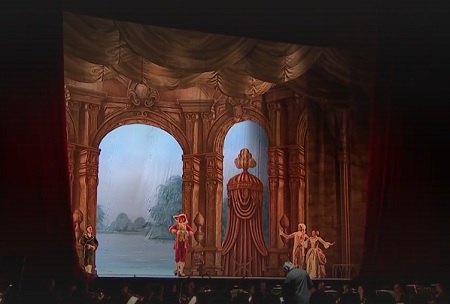 "We are against war, but first we ask you to honor the memory of the victims with a minute of silence." This sentence has become a ritual at each performance of the St. Petersburg Festival ballet in support of Ukraine. Friday, March 4 at the Zénith d'Auvergne, the Ukrainian anthem resounds. Then the curtain rises, and the time of a Russian ballet, the war seems almost far away. On stage, Russian or Moldavian dancers come together to tell the story of "Sleeping Beauty".

"It's really important for me to keep dancing to convey a message, even if it's sometimes very complicated. I often lose focus, I constantly think of my family, it's horrible" , says Alex  Bogutsky , Ukrainian dancer of the St. Petersburg Ballet. His Russian companion, playing the role of Sleeping Beauty, did not hesitate to support him. Several Russian performances have been canceled in France.