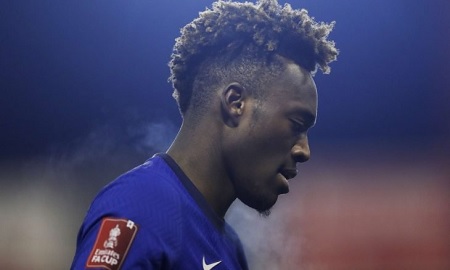 The Italian football club, Roma, has concluded a deal to sign Tammy Abraham from the European champions Chelsea, for 40 million euros ($47.1 million).

The English striker signed a five-year contract with the Italian club, after his departure from Chelsea, who scored 30 goals in 82 games after being promoted to the first team through the Chelsea academy.

"You can feel that the club really wants you - and Roma made it clear immediately," Abraham, who will wear the number 9 shirt, told the club's website.

He added: “Roma is a club that deserves to compete for titles and awards. I had the experience of winning big titles, and I would like to participate in these tournaments again, so I want to help this team achieve that and reach the place it deserves.”

He continued, "It is a great honor to wear the shirt number /9/ in this club, and I can't wait to start and help the team."

And the British news agency "BA Media" reported that Abraham, 23, seeks to participate mainly in a regular basis.

Abraham will work in the Roma team under the leadership of Portuguese coach Jose Mourinho, the former coach of Chelsea.

She added, "We all enjoyed watching his development through our academy all the way to the first team, and we are grateful for his contributions to our success at the first team level as well as the age group sector."